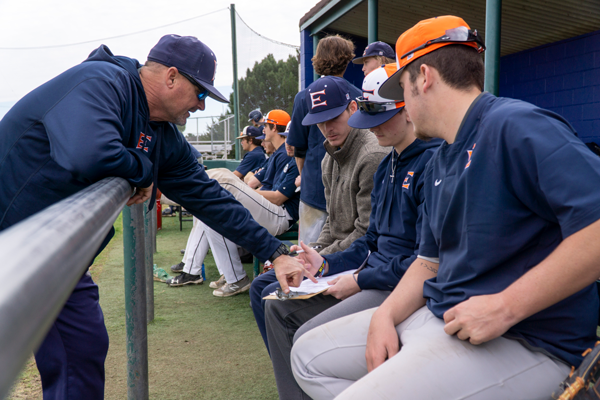 Coach Michael Martin looks over pitching records from practice with some of the team’s pitchers. Throwing more strikes is one of Martin’s biggest focuses for the team going into conference play. Photo by Yesenia Alvarado/The Et Cetera

Even before the 2019 Harvesters baseball season started, the competition was intense. They won three of their first four games in pre-conference play.

“You’d better be working your butt off out there because we’ve got enough good players that we have options for each position,” Martin said.

Despite 16 players leaving Eastfield, Martin is confident in his team. Six sophomore pitchers departed Eastfield at the end of the 2018 season. This year, the team has 15 sophomores to bolster its roster.

Transfer students like right-handed pitcher Derek Potts, who came to the Harvesters from North Central Texas College, and freshman Jared Tipton, an infielder and right-handed pitcher who transferred from Louisiana State University Eunice, are expected to be key players this season.

Potts said he decided to come to the Harvesters after he played against them last year. He was impressed by their performance last year when the Harvesters won with a walk-off home run. His focus this season is gelling better with his new team.

“You need to know that in any given play, the person behind you has got your back and you can rely on them,” Potts said.

Potts averaged 9.82 strikeouts per inning in conference play last year and was credited with three wins out of five conference games.

While Martin said the team has talent, there’s still work to be done. Like last season, the Harvesters will be working on honing their pitching to stay ahead of hitters and will focus on improving defensive efforts before going into conference play.

Tipton said he also wants to see the team improve is power hitting.

“We hit a lot of groundballs,” Tipton said. “If we get rid of those, hit more home runs and pitch good, then we’re good.”

Those groundballs lead to a lot of easy outs, Tipton said.

Sophomore catcher Trenton Dowley said his biggest focus is on improving his own hitting.

“I spend a lot of time here in the cage, getting my swings down,” Dowley said. “And just relaxing and focusing at the plate.”

Dowley shows up to free practice every day so he can get to work on his hitting. That gives him an extra hour to work on his swing. Martin said the goals, not only to win the championship but for improvement in specific areas, are similar year to year.

“We’re always looking to throw more strikes,” he said. “We’re always trying to get ahead of hitters on the mound, trying to play better defense and that all changes from year to year, especially at the community college level because you only have these kids for two years.”

He’s looking toward freshman right-hander Ryan Puyear to be an “impact guy” on the mound and is counting on sophomore right-hander Tyler Stone to come through this year. Stone pitched 59.2 innings last season with an ERA of 5.58.

Last year, the Harvesters overcame a slump that left them with a .500 season in 2017.

The Harvesters had a 38-14 overall record in 2018 but missed a shot at a national championship run in the District C tournament with back-to-back losses against Brookhaven and Richland.

Martin said it’s important not to underestimate other teams in the Dallas Athletic Conference.

“Our conference is always tough,” he said. “There are two or three teams at the top usually battling it out: us or Brookhaven or North Lake or Richland. They’re all tough. It’s a tough baseball conference, so we don’t really concern ourselves a whole lot with what these other teams are doing. We know if we go out and play like we’re capable of playing, all of that is going to take care of itself.”

For a roster and schedule, go to http://eastfieldcollege.edu/slifeefc/athletics/baseball