Review: Common book 'Maus' a masterful look at terrors of the holocaust 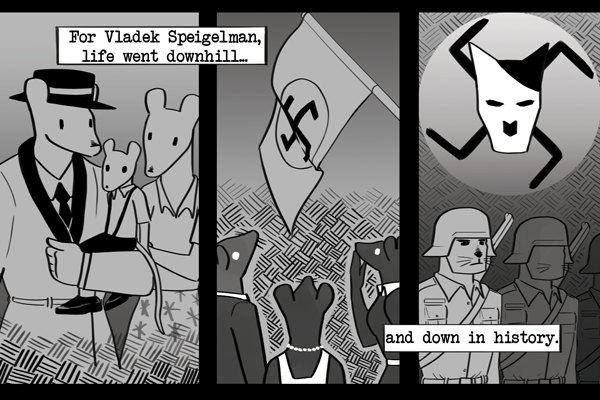 
Since its release, Art Spiegelman’s Pulitzer Prize-winning graphic novel “Maus” has been a hallmark of visual storytelling. Maus has sold more than 1 million copies in 30 languages over two volumes.
“Maus” is Eastfield’s common book for the 2018-2019 academic year. Spiegelman will visit the college on Oct. 17 to provide a lecture for interested students.

Plot
The plot of “Maus” alternates between two timelines: a series of interviews between Spiegelman and his father, Vladek Spiegelman, in late 1970s New York and Vladek’s recount of his life as a Polish Jew during the World War II era.
Spiegelman frequently visits his father to learn more about Vladek’s past and the Holocaust. Spiegelman wants to create a book, which eventually becomes “Maus,” that encapsulates his father’s experiences with Nazi oppression and his own understanding of Judaism and feelings as a Jew. He also has a strained relationship with his father, displayed through their arguments and talks about Art’s youth, mother and lifestyle.
Vladek starts his recount of the Holocaust in his late 20s. He lives in Poland before meeting his first wife, Art’s mother. The tale closes when Vladek reunites with his wife following the end of WWII before immigrating to America. Throughout the series of interviews, Art learns how his parents met, about his older brother who died before he was born, how his father narrowly avoided death on many occasions and how his parents survived 10 months in Auschwitz. There are other smaller events within the story that reinforce the idea that Vladek Spiegelman was incredibly lucky to have survived.
Author
Art Spiegelman, born Feb. 15, 1948, is an American cartoonist, editor and comics advocate. While he is best known for creating “Maus,” Spiegelman also worked for The New Yorker and The Topps Company.
Although he was born in Stockholm, Sweden, his family moved to the United States in 1951 and eventually settled in Queens, New York, in 1957. Spiegelman began cartooning in 1960 and was being paid for his work by age 15.
Honors and Pop Culture
“Maus,” which won the Pulitzer Prize in 1992, is consistently said to be one of the greatest graphic works of the 20th century and helped to bring the term “graphic novel” and the concept of adult-themed comics into the mainstream.
Spiegelman has received numerous offers to have “Maus” adapted for film or television, but he has declined all of them. “Maus” is cited as a main influence on other graphic novels such as Marjane Satrapi’s “Persepolis” and Alison Bechdel’s “Fun Home.”
Review
“Maus,” despite using anthropomorphized mice, cats, pigs and dogs, is a tale that feels incredibly human.
Being a graphic novel, “Maus” meaningful words and dialogue with powerful imagery. Some of the more violent scenes in “Maus” are especially chilling because the reader can visualize a beating or battlefield but still recognize that animals are used instead of people.
The use of a dual narrative works wonderfully. While Vladek recalls living through the Holocaust, he and his son have everyday interactions and side tangents that provide more insight to their characters. The reader will come to understand Spiegelman’s difficulty connecting to his father and how Vladek’s state of mind was altered because of the Holocaust.
As the story progresses, the reader may constantly be left wondering how Vladek managed to survive past every crazy, dangerous and scary encounter with Nazis, anti-Semitic Poles and sometimes other Jews.
Overall, “Maus” is a graphic novel that provides a small window into the life of Spiegelman and his father. By masterfully examining themes of memory, guilt, racism and language, Spiegelman is able to tell a story not only about fear and death but also of hope and survival.
https://eastfieldnews.com/2018/08/29/photo-gallery-eastfield-unveils-new-mascot/