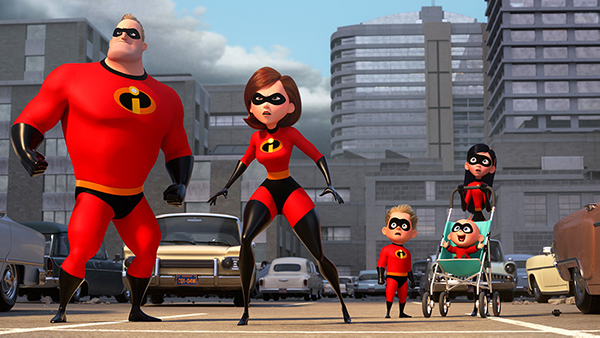 By ARIA JONES
@AriaJonesETC
If you’re hoping “Incredibles 2” was made in consideration of the generation that has grown into adulthood waiting for a sequel, you’re in luck.
Pixar brings back the Incredibles and other fan favorites like Frozone (Samuel L. Jackson) and Edna Mode, who is voiced by the writer and director Brad Bird.
The film avoids competing with its predecessor by staying consistent while still bringing in new themes and characters. And even though it has been 14 years, not even a second has passed in the Incredibles’ world, which works.
The movie itself is well animated and so detailed, it’s easy to get distracted trying to count the hairs on everyone’s heads.
Although there are plenty of stunning visuals, cute moments and superhero battles to distract, the story itself still possesses all of the realness this movie needs.
[READ MORE: ‘Infinity War’ review: Marvel’s greek tragedy you’ll tearfully watch a thousand times]
Bird crafted a story about a superfamily that keeps the heroes grounded with their everyday problems, and this is what made it so enjoyable.
Elastigirl (Holly Hunter) leaves Mr. Incredible (Craig T. Nelson) in charge of family life while she goes off to fight crime.
As the job of caring for a baby with laser vision, floatation and teleportation quickly wears Mr.Incredible down, he shows a whole new level of heroism.
Baby Jack-Jack (Eli Fucile) may be cute, but he is trouble. In one scene he hilariously battles a raccoon who was digging in the trash.
To add to the personal challenges the family faces, Violet (Sarah Vowell) is having boy problems, and Dash (Huck Milner) is falling behind in “new math” that Mr.Incredible just can’t seem to understand.

Bird didn’t create a world where the superheroes have everything handed to them and this is what adds depth to the story.
The Incredibles don’t conveniently have the funds or resources to support their crime-fighting adventures. Instead, the organization that supports the family shuts down, pulling their funding as the government doubles down on superheroes.
All the destruction in the first movie has convinced the government that there would be less damage if the superheroes just let the villains do their thing.
The family’s home is still burned down after the plane crash in the end of “The Incredibles,” and it leaves them living in a crammed motel.
The relationship between Elastigirl and Mr. Incredible is still imperfect. Mr. Incredible is unemployed, and the family struggles with their crime-fighting abilities being outlawed.
Unlike other animated children’s films, the jokes don’t find their humor in being inappropriate and undetectable by children.
The jokes are funny because they’re based in so much truth.
[READ MORE: Review: “Finding Dory” tells original story without an overdose on nostalgia]
Even though they are super, the Incredibles still deal with issues like job insecurity, the struggle of parenting, stress, fatigue and asking for help when they need it.
The characters aren’t only elevated because of their ability to beat up villains. Instead their heroism comes from the act of raising a family, working together and finding success in life.
“Incredibles 2” is impressive, but it doesn’t quite make up for the long wait.
Considering that he was once again the funniest incredible, If Jack-Jack gets his own movie, it might be enough.
Delete Image
Align Left
Align Center
Align Right
Align Left
Align Center
Delete Heading