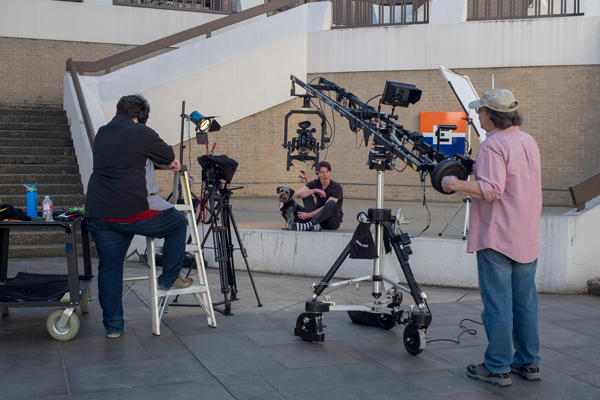 Nick Vera films a video on pet adoption with his dog, Stuff, in the designated free speech area in the lower courtyard. Photo by Jesus Ayala/The Et Cetera

As Nick Vera stands in Eastfield’s free speech area, he knows that the words he’s about to speak could result in backlash. He looks to one of the cameras set up in front of the Lower Courtyard stage and delivers the first of several speeches designed to start a “free speech flash mob.”

His videos touch on both non-controversial issues, like pet adoption, the understated importance of Martin Luther King Jr.’s second “I Have A Dream” speech, and more provocative topics, such as questioning the morality of banning marijuana and challenging the slogan of the Dallas County Community College District.

“I want people to be jealous,” Vera said. “I want them to be mad. I want them to be anything but neutral towards it. That tends to evoke an emotional response, which is a perfect breeding ground for art to be created.”

The end goal isn’t to offend, though Vera said he knows some people will be offended. He wants more students and employees within the college community to share their views, controversial or otherwise, more openly.

In 2016, a Pew Research study found that Millennials have moved further from protecting free speech that may be offensive than generations before them.

The study said that 40 percent of 18-year-old to 34-year-old Americans were “OK with limiting speech offensive to minorities.” Only 27 percent of Gen X Americans, the second generation most willing to limit offensive speech, supported the same measure.

The violence spurred around the world by offensive speech was one of the primary motivations to the series.

From an attack on the French satirical newspaper Charlie Hebdo over cartoons of the prophet Mohammed to the rioting by students at the University of California at Berkeley in reaction to speech by conservative provocateur Milo Yiannapolis to reaction to an unpopular column on campus, Vera said unpopular speech is under attack and it’s time to defend it.

These trends were a part of what inspired the speech professor to create this series, both to combat the anti-free speech atmosphere and test the boundaries at Eastfield.

History professor Kat Reguero said she worries that active use of the free speech area could open the door to offensive or inaccurate statements.

“What if it degenerates into name-calling back and forth?” Reguero asked.

She said that while she feels there should be some control over what is said in the free speech area, she also believes in the right to hold and express controversial opinions.

Reguero still wonders whether there should be some regulation on the free speech area on campus to avoid disruptions, false facts and protect students.

“Did you just create a space for bullying?” Reguero asked. “Is that what you’ve created? You know, ‘I can say what I want. I was in the free speech zone.’ That’s the part that scares me.”

Phrases like “illegal immigrants” can be detrimental to debates and to the wellbeing of students, Reguero said.

“It’s harmful, it’s hateful, it’s indicative of where we are now and it’s an extremely damaging term,” she said. “I teach my students all the time not to use that term.”

Reguero said that it may sound “horrible” but the free speech area needs structure and some regulation, with fact checking and someone to prevent the area from devolving to a place for people to attack each other.

“It’s sad that we need to make it clear because it’s obvious, but free speech doesn’t mean freedom to attack, freedom to insult or debase someone,” she said. “But unfortunately, a lot of students, that’s what goes in their head. No repercussions.”

English professor Shazia Ali said that genuine views one person holds could be offensive to another person, and limiting speech by the parameters Reguero said could lead to censorship of unpopular thoughts.

“What if a student is against a certain something, very strongly opposed to a certain something, why wouldn’t the stand up in this free speech area and say that this is bad?” Ali said. “Because they believe that it’s bad. It’s a different thing that we believe that it’s not bad. Wouldn’t that become insulting and debasing to the person of that ethnicity or whatever is being attacked.”

She said free speech is especially important in academia.

“I had a student who told me to my face that, ‘I don’t need to be learning English from someone like you.’ That’s free speech,” Ali said. “I can get upset about it and cry that it’s against Muslims and whatnot, but at the end of the day he had the right to say that. So free speech also goes into the places where we’re uncomfortable.”

Ali feels that free speech is facing societal restrictions, even on Eastfield’s campus.

She said that unwillingness to express unpopular views because of fear of backlash is a type of censorship created by society.

Reem Soliman, an ESOL professor, said Eastfield has seen censorship in the past. At one point, Soliman said an art instillation inviting students to post comments in a window in the library was taken down when some comments were deemed inappropriate.

“I thought that was disingenuous because if the whole point was to have conversation or to see this,” Soliman said. “It was a very small, small percentage of the comments that then caused us to lose this whole, wonderful concept.”

Vera said he wasn’t always such an ardent advocate for free speech, at least not to the level he is now.

Vera said as he became more educated and grown up, he’s started asking more questions and challenging the answers he gets. Now he sees the careful construction of language to least offend, such as saying “he or she” instead of using one gender-specific word, as unnecessary.

“I used to actually be on the opposite side of a lot of these issues, and I really thought that I was right,” Vera said. “Whenever a student said, ‘Well let’s say you ask your doctor and he tells you—’ and I would say ‘he or she.’ I was that guy. I thought that stuff really mattered, and I was doing a lot of those things.”

Vera said he’s being optimistic in his belief that students and his colleagues will take to the free speech area immediately and use it as he envisions, but he will work until that is a reality.

He hopes that viewers of his videos, especially those who disagree with him, will see that they have a right to share their opinions and will find themselves more strongly supporting freedom of speech.

Soliman said Vera will likely receive negative feedback on the slogan video and other controversial topics that are to come.

“He definitely singled himself out in a very, very public way against a very large system, and I’m sure he’s going to draw criticism for it,” Soliman said. “But what’s the alternative for it?”

Soliman said she agrees the slogan is a poor example of what the DCCCD is all about.

Silmar Moreno, one of Vera’s students, watched the 20-minute video — the longest of the three Vera has released — on the DCCCD slogan.

“I was inspired, and when it was over I was like, ‘What do you mean this is it?’” Moreno said. “I watched his video outside of class, I would never do that for anyone else.”

For the rest of the spring semester, Vera will release another video from the free speech area each week.

New videos can be found on YouTube at Vera’s channel, Cursive Speaking.