‘Anna in the Tropics’ delves into humanity, infidelity 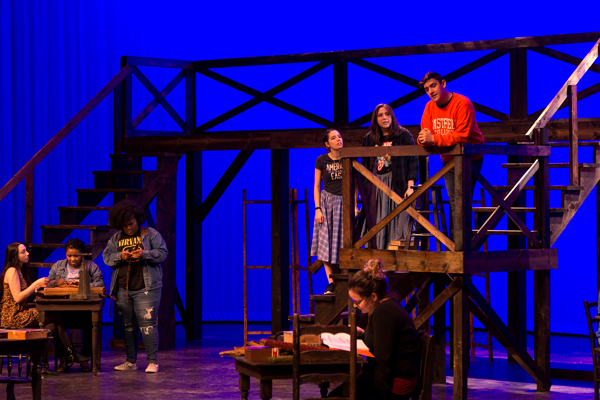 The cast of "Anna in the Tropics" rehearse for their April 19 performance. Photo by Yesenia Alvarado/The Et Cetera

The Harvester Theatre Company explores the human condition with “Anna in the Tropics,” a story of a family-run cigar company in 1929 Tampa, Florida, that is changed drastically by a new employee.

The new worker is charged with reading to the cigar rollers as a basic form of education. He decides to read “Anna Karenina,” causing everyone to imitate the various scandals of the novel. This of course wreaks havoc on the working families, challenging their family ties and values.

“It’s a little more intense, a little more adult, mature,” said theater major Victor Deterra, referring to the themes and overall story of the play. “This play is all about infidelity, and some heinous acts do occur.”

Guest director Becky McDonald said that the most difficult part of this play, which won the Pulitzer Prize for Drama in 2003, is conveying the little details and nuances of the script.

Deterra, who plays the role of Cheché, reinforced that notion.

Cheché himself is a more malevolent, but still relatable and complex, character, Deterra explained.

“If you find yourself sympathizing with Cheché, that’s what we want,” he said. “I wouldn’t call him a villain, but he’s really in this gray area.”

“Anna in the Tropics” main appeal as a play is its engaging cast of characters and how they react to the chaotic events of the show, McDonald explained.

“Even our ensemble members who don’t necessarily have any lines, the way they react to these situations is extremely relatable.”

In addition to being a varied production in terms of relatability, McDonald talked about how the play has several messages to offer to different age groups.

McDonald has worked in multiple theater job, including Addison’s WaterTower Theatre. She worked as a director and choreographer, taking on behind-the-scenes work as well. She is now working as a full-time theater director at North Garland High School.

Deterra and Joseph Martinez, a theater major who plays the speaker Juan Julian in the performance, vouched for McDonald’s directing expertise.

Both credited her solid vision and straightforward teaching methods.

“It’s been a great learning experience,” Martinez said. “There are things I learned in this show that I have never experienced in any of the other shows I’ve been with.”

Evening classes may bring their students for free but will need to RSVP in advance to [email protected] Because of the adult content, the show is recommended for age 13 and up.