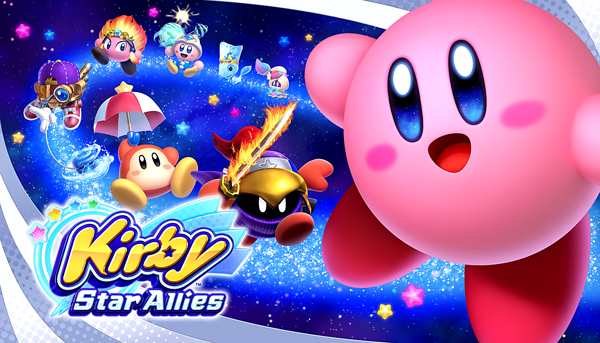 
By ANDREW WALTER
@TheEtCetera
While other Nintendo franchises like “Metroid” or “F-Zero” only get new installments when all the planets in the solar system align and it starts raining cats and dogs, the Kirby series manages to pump out at least one game every year.
Many Nintendo fans who don’t play “Kirby” games always wonder why this series gets so much love from Nintendo while other series in demand, such as “EarthBound,” are relegated to cameos in the Super Smash Bros. games.
Perhaps if they spent some time playing almost any non-spin off Kirby game, gamers could learn that not all games are about reaching the top of the leaderboard, getting a godly KDR and bragging to all your friends about how MLG you are or subjecting yourself to a mind-numbingly hard game just to say that you’ve beaten it.
Games, simply put, are all about how much fun you can pull out of them.
With that being said, I’ll now get off my high horse and proceed to rip into the latest “Kirby” game, “Kirby Star Allies.”
“Kirby Star Allies” for the Nintendo Switch follows the standard “Kirby” gameplay formula of suck at it and try again.
What makes “Star Allies” unique compared to other “Kirby” games (if you can even call it that, as other games in the “Kirby” series have already done most of what is claimed to be new in this game) is that Kirby can throw friend hearts at most of his enemies and have them fight at his side. Hand a Joy Con controller off to some other loser older than 12 still playing Kirby games, and they can control the newly acquired love-slave for some good old-fashioned couch co-op gameplay.
With the new “Star Allies,” Kirby and pals can beat up poor, defenseless Waddle Dees, solve puzzles made for infants, and fuse abilities to make new ones like sizzle sword, zap bomb or splash cutter.
It is strange but cool, though, that Kirby can now fight alongside some old rivals and enemies like Marx from “Kirby Super Star,” considering that Marx was the final boss from that game who tricked Kirby into granting his evil wish of enslaving all of Pop Star. I guess Kirby forgave him for, um, reasons?
Believe me when I say this, this game is so easy that it wants you to beat it. If you happen to be playing by yourself (which of course you are, you friendless, sweaty, neck-bearded, basement dweller), most of the time you can simply walk and float around while your computer controlled allies murder everyone around you like some kind of happy, fluffy gang warfare syndicate.
Being a “Kirby” game, it has a story line that is so insignificant the game will ignore its own plot for you.
By the end of the story mode, the plot will leave you with more questions than answers. And frankly, 99 percent of players won’t care. Only the most diehard Kirby fans will be left wondering what\ it all means.
If you aren’t into easy games, don’t worry, it gets worse. This game is incredibly short, even by “Kirby” standards.
The story campaign will probably take around six hours, and that’s if you are going for 100 percent completion. If you just want to breeze through the campaign, expect four hours or less.
If you care about 100 percent completion, know that you’ll need to grind for puzzle pieces, which pads out the gameplay to an infuriatingly boring level.
After beating the campaign, players will unlock a speed run-based mode where you control any of the Star Allies or Dream Friends (I know, great names) and play through the campaign in a nonstop rush to the end, where a secret boss awaits.
There are also two minigames that will hold your attention for about five minutes, and then you’ll likely never play them again: Chop Champs and Star Slam Heroes. The only time you might go back to them is when messing around with the multiplayer.
The last piece of content the game offers is a boss rush mode where you can manually set the difficulty. The highest difficulty setting actually offers a genuine challenge, provided you aren’t a weenie who spams the amiibo functionality for extra healing items.
I only know about that because a friend told me about it. I would never use the amiibo myself just to quickly beat a game and write a review about it.
“Kirby Star Allies” is a game all about dumb, blind, easy co-op fun. The story isn’t really worth remembering, the gameplay is the same as it’s been since 1993 and the amount of content is lacking. But if you’re willing to look past these gripes, you’ll find a love letter to long-time “Kirby” fans that sets out to do exactly what they expect and want.
Delete Image
Align Left
Align Center
Align Right
Align Left
Align Center
Delete Heading