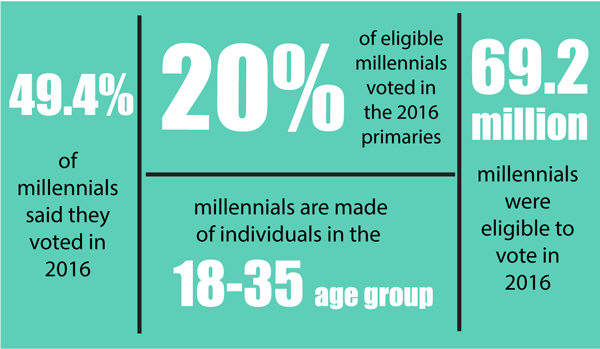 Research by pollsters has consistently found voter turnout among millennials has been dwindling the past several years.

The issue was a hot topic when State Representative Victoria Neave visited Eastfield on Feb. 28 as part of the Student Government Association’s Voter Registration Forum.

A poll conducted by Forbes in 2016 estimated that in primary elections, fewer than 20% of millennials who are eligible to vote actually do, and that number has never exceeded 50% in the poll’s history. Last year, the University of Michigan launched a similar study with a similar outcome, finding that at last midterm, the number was 14%.SGA Vice-President Celeste Canales, a psychology major, found the statistics disheartening.

“Our city, state and country hurt because very few people become the change they want to see,” she said.

However, Neave is optimistic that the number will rise.

“I think these times we are in right now are very exciting,” she said. “We are starting to see an increase in the voter turnout of populations that hadn’t voted in significant numbers in the past.”She said her own campaign involved several millennials who were determined to help other millennials vote.

A first generation Mexican-American, Neave has been heavily inspired by her immigrant father.

“He came with a sixth-grade education, but he also came with a dream,” she said. “My parents emphasized to me over and over the importance of an education and going to school and making sure that I get my degree. He would tell me ‘don’t forget where you came from. Make sure you give back and treat people right.’”

Neave has made proposals to make Eastfield a polling place due to its diverse population of more than 14,000 students, and to make a college ID an appropriate form of voter ID.

She said many college students do not possess the current types of acceptable Voter ID. She believes that both of her proposals, should they be enacted, will make college students not only more able to vote, but also more motivated to vote.

“There are a lot of people who don’t want you to vote,” she argued. “They want you to stay home… just go to class.”

Neave’s words touched the students in attendance.“I really like that Rep. Neave came out and spoke with us,” SGA Representative Lillian Vazquez said.

“That really shows how much she is dedicated to the students and her community. It was really great that she was promoting young people in college to go out and vote more,” Vazques said.

SGA President Yazmin Lopez was also moved by the presentation. She was drawn to Neave’s proposal to make Eastfield a polling place, and was quick to explore the benefits.

“We need people, a new generation of young people to come to the polls and vote,” she said. “If they bring a polling place to Eastfield, that means young people are able to vote… That’s one of the things with SGA I try to promote.”

The next voting cycle will begin May 14, for the Primaries runoff. The General Election will be Nov. 6.