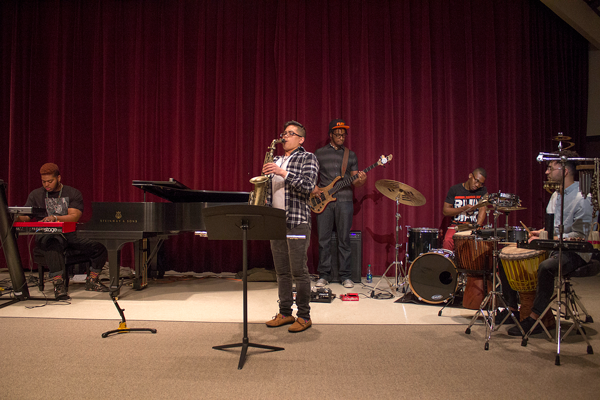 Kwinton Gray sits relaxed between his Nord Stage 2 EX keyboard and a grand piano, gazing out into a room where he once sat and watched other musicians play. His large frame sits tall on the piano bench as he begins running his hands from one end of the keys to the other.

The 23-year-old musician wears his jeans cuffed to reveal an array of colors on his feet. His lively Adidas floral print high-tops contrast against the golden piano pedals. Gray moves his eyes onto the rest of the band, and with one final nod, they know it’s time to shine.

Gray and his brother KJ, 25, who are both former Eastfield music students, recently returned to campus with their band The Kwinton Gray Project to perform for the Wednesday Recital Series. It was only a few years ago that they were fine-tuning their musical talents under the direction of professors Oscar Passley, Kent Ellingson, Eddie Healy, Pierrette Mouledous and others.

“It was somewhat of a homecoming,” Passley said. “A lot of times when you teach somebody you don’t really know if you made a difference until way later, but I’ve been teaching long enough to know that way later is now. It’s cool to start seeing the fruits of your teaching.”

Passley recalls how KJ initially wanted to be an engineer, while Kwinton wanted to go into real estate.

“It took me about a year to help [Kwinton] realize that he probably should do music,” Passley said. “I knew he should be doing music before he did.”

Awarded “best keyboardist” in 2017 by the Dallas Observer, Kwinton has made a big splash early in his career. He has already had the opportunity to play alongside many recognizable names in the music scene, such as Kenny Garret, Darryl Jones, fellow Eastfield alum Bobby Sparks, Derek Winkley, and Larry Dunn, keyboardist from the group Earth, Wind and Fire.

Kwinton has also performed in several musicals at the Dallas Theatre Center. His most recent was “Hood: The Robin Hood Musical.” He also performed at the “A’la Villette Jazz Festival” in Paris.

“Kwinton is really talented. He wrote all the songs. He’s the mastermind,” said Jonathan Mones, who plays the flute in addition to the saxophone and has been with the Kwinton Gray Project for about three years. “Without him, there wouldn’t be this band.”

As full-time musicians, Kwinton and KJ stay busy. Both belong to other bands, including Friday’s Foolery, a more pop-oriented group that plays every Tuesday night at Three Links in Deep Ellum.

“I’ve taught long enough to see plenty of kids that are talented, but then they don’t work hard,” Passley said. “Both of them worked hard.”

Kwinton is currently preparing to tour with Dallas-based jazz group “The Funky Knuckles” later this year, but he enjoys all types of music. He even played in a Texas country band early in his career.

“I don’t really consider myself a jazz musician,” he said. “I don’t know what that is. I just consider myself a musician. My favorite artist of all time is Stevie Wonder. Everything he did was not theory based, it was feeling based. It was a true expression of inner self through music.”

The Grays also have an older sister, Kierra, who is a full-time musician. Kwinton attributes the siblings’ musical talents and interest in music to their father, even though he never played an instrument.

“I was very fortunate that my dad loves music,” Kwinton said. “He never played anything, but he loves music, so he probably has more music on his computer than I do.”

The band played four original compositions, starting with “Leap of Faith,” a tune written by Kwinton featuring KJ plucking a jazz bassline that keeps the rhythm moving forward. The composition shifts into an upbeat saxophone melody by Mones, then a drum and percussion solo. Jackie Whitmill on drums and Nicholas Rothouse on percussion engage in a synchronized battle, with drumsticks and hands as weapons and their rhythm as ammunition.

“It’s the first song I ever wrote for this group, and that’s going to be the name of my album.” Kwinton said. “When I [made my] leap of faith it was a relief for me — starting my own band instead of being a musician for somebody, and making that transition from just a musician to now an artist.”

The group then played originals “For Lease,” “Bamboo” and “Pure Tamir,” a song that Kwinton said he wrote about “the pureness and innocence” of Tamir Rice, a 12-year-old boy killed by police in Cleveland, Ohio, in November 2014. The number began with a somber intro, as only Kwinton’s keyboard could be heard. Then the rest of the band slowly joined in, adding conflict as the piece progressed into a violent mesh of war between instruments.

“The beautiful thing about being a musician is being able to tell a story,” said Kwinton, who penned the following lines under his YouTube performance of the song:

“I wrote this song about a 12 year-old king.  I imagined all the things that he dreamed, and could’ve seen. This year he would’ve been 16.”

Music student Michael Ver Steeg said this recital had a different feel than others he has attended.

“Others really use a lot of classical pieces and basically, they do covers,” he said. “It was nice how they shared original pieces and how they related some of it to real-life events. It’s inspirational. I hope to do that one day.”

Before the band ended the set with a cover of Joe Henderson’s “Black Narcissus,” Passley gave an inspiring message to the younger musicians in the audience.

“For the students feeling overwhelmed and feeling like giving up, you see, like KJ you can start late and still learn your craft,” he said. “Don’t let not knowing how to read music stop you from doing what you love.”

At the end of the performance  students, faculty and staff showed their appreciation for Kwinton and company.

The band will be releasing their first full album this month.

“I don’t want to discredit any of the other recitals, but this one has been my favorite so far,” voice major Vanessa Kincheloe said.

Fellow music student Irene Recendez agreed, saying it was inspiring for students to see performers that they can relate to.

“It was such a new vibe,” she said. “Usually, the performances we get are older classical or jazz styles, but this was so fresh because the performers were so young.”

Afterward, the students got a chance to ask the Kwinton Gray Project band members questions and get their advice.

“The performance was amazing,” music education major Jazmine Gonzales said. “It really inspired me to work harder, to do more than I’ve been doing.”

— Julio Vega and Keaira English contributed to this report