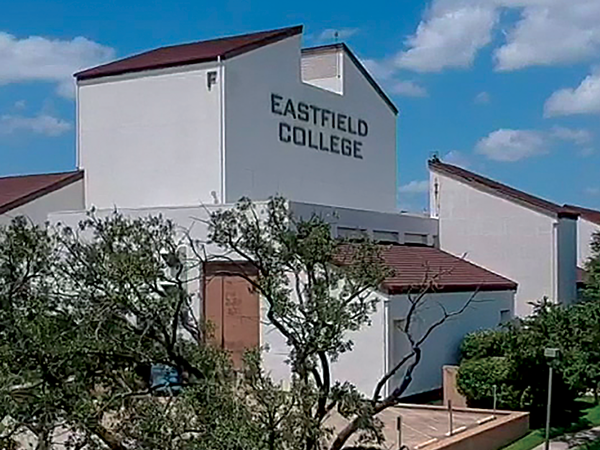 Walking around, photographing Eastfield’s campus on the first day of spring, I could not get a good composition without something ruining my shot. Whether it was dead plants or the drabby, run-down paint from the buildings, there was something that made my photographs less appealing.

The campus has seen some renovations as of late. Bathrooms and staircases are being updated, easle displays for on-campus marketing have been replaced with sleek towers of posters and the exterior is getting a face lift in the form of a paint job.

But in the efforts to update and revitalize the campus, Eastfield has had a run for its money. Its infrastructure is worn, plants are dying and the interior of core buildings is not looking its best. The campus looks the same as it did in the 1970s, but a little worse.

It has a few eye catching places, such as the giant silver ball in the upper courtyard that is impressive at first, but then gets dull with each passing. The G-building is one of the only places on campus with an attractive interior and exterior.

The outside walls of Eastfield look as if they have not been painted since the campus opened, although that is currently changing. The campus is being coated in three new colors making it pop out, excluding buildings T, W and K.

The upper courtyard is also being revived with the removal of most of the dead plants.

Those plants are being replaced with new ones. There has also been a new addition of flowers throughout campus, giving it more color.

All of these changes are improvements on the way the campus looked before, but the interior still looks bland with its ugly carpet and tacky seats that have no back support. They are literally cubes and rectangles just scattered around the buildings.

Do not get me wrong. I am not the best dressed, but I at least know what colors to mix and match.

It is not all bad, though. Some buildings have seen improvements.

The C Building’s Welcome Center went through improvements over spring break with a fresh set of paint, seating and computers for orientation. Other interior improvements have been bathrooms in C and N, two of the worst bathrooms on campus.

Eastfield is the second oldest Dallas County Community College District campus. In many ways it feels like we’re stuck in the 1970s.

If Eastfield wants to compete with other DCCCD campuses such as Brookhaven, which has water fountains, modern designs and great student lounging areas, Eastfield needs to get with the times and get its infrastructure and interior design in check to appeal to the youth.

Nobody wants to go to a bland looking college.

Adminstators have big plans for Eastfield’s long-term improvement, but it will be years before those plans become reality – if they even get approved by the district.

Most current students will be long gone by then.

In the meantime, I welcome the minor changes that improve the campus environment.

— Jesus Ayala is a photo editor and a journalism major.