Satire: Read if you dare: Prominent figures condemned to Dante’s 9 levels of hell 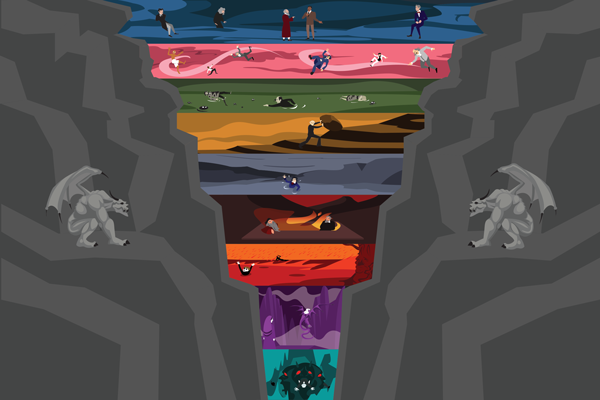 Dante Alighieri wrote “The Divine Comedy” nearly 700 years ago in the 14th century. The three-volume work focuses on the experience of life after death and the possibilities of each metaphysical stage in the afterlife: heaven, hell and purgatory.

In Dante’s “Inferno,” he threw many prominent members of society in various circles of hell to reflect the crimes he believed they committed. Some of these individuals were loved by the people.

History has a very odd way of forgetting the flaws of its trailblazers and so-called “saints.” To demonstrate that even the best among us cannot escape hell, here, I list the titans of good deeds and great achievements and the flaws that made them human. 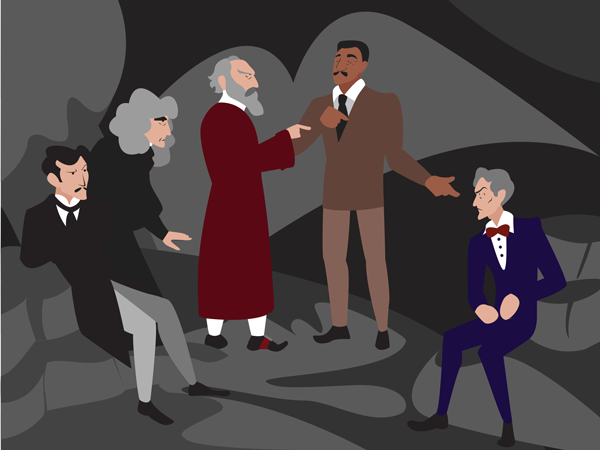 Limbo is reserved for the virtuous pagans who lived before the time of Jesus Christ and therefore never had the proper chance to gain entry into heaven, yet they did not deserve the punishments of hell. According to Dante, this is where the unbaptized and the philosophers are kept.

In this modernized adaption, I’ve chosen to reflect a more modern philosopher: the scientist. This is where we’ll find Galileo and Isaac Newton. Nikola Tesla, whose worst crime in life was falling in love with a pigeon, and beloved childhood figures such as Bill Nye and Neil deGrasse Tyson. These men led upstanding lives, but due to their rejection of traditional belief, they are not granted admission into heaven. 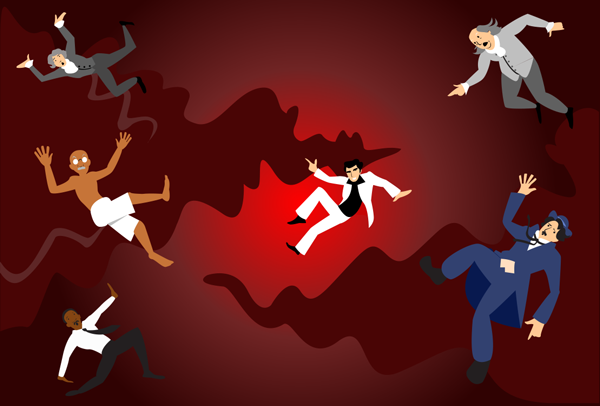 In this circle, the lustful are blown about in a never-ending storm to reflect the nature of their sin. Among the harsh winds we find many prominent historical figures who were slaves to their passions.

Mahatma Gandhi and Martin Luther King Jr. were well-documented adulterers. Charlie Chaplin impregnated a 16-year-old girl when he was 30 and Elvis Presley at the age of 24 fell in love with his future wife Priscilla Beaulieu when she was just 14.

Thomas Jefferson and Benjamin Franklin would also find their way into this circle due to their degenerate tendencies. Franklin is even quoted saying that his own libido was so strong, he himself was scared of it. 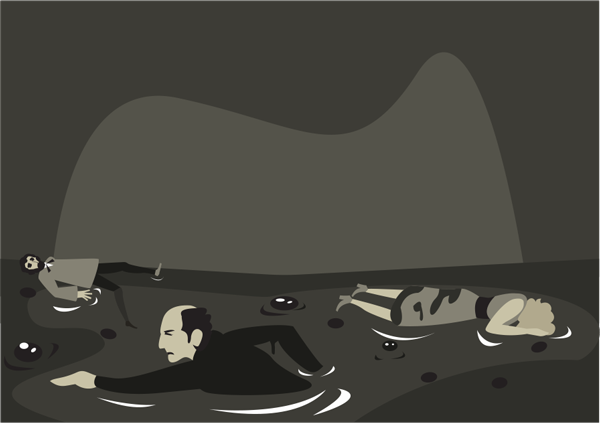 In this circle, gluttons are forced to wallow in sludge for all eternity to represent the addictions they had in life. Here we’ll find many tortured artists.

Vincent van Gogh, Oscar Wilde and Ernest Hemingway were all documented abusers of absinthe and alcohol. Jackson Pollock even did a split self-portrait to demonstrate his personality with and without booze. Charles Dickens and Edgar Allen Poe were opium addicts. Andy Warhol was addicted to amphetamines and Marilyn Monroe was known for doctor shopping to obtain barbiturates that would eventually contribute to her death. 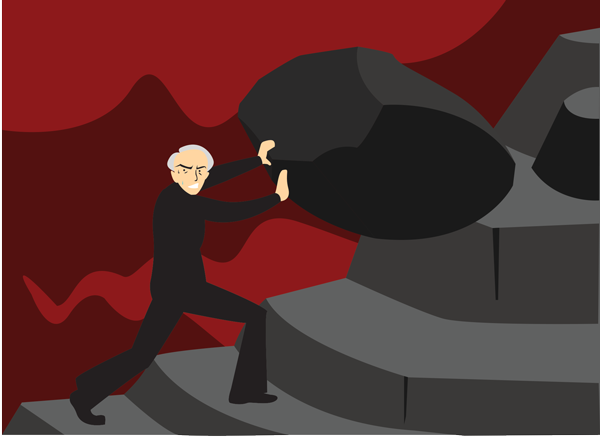 In this circle, the greedy are made to push massive stones to symbolize their selfish drives during their lifetimes. When Dante passed through this circle, the punished were so preoccupied with their task that he was unable to speak with any of them.

However, one figure in the modern world stands out.

Thomas Edison, often wrongly credited as one of the greatest inventors of all time, once said, “Anything that won’t sell, I don’t want to invent.” What he meant to say was, “If it sells, I’m more than happy to rip off my colleagues to make sure I’m the only one that turns a profit.”

Edison was never much of an inventor; he was a businessman that simply ran to the patent office anytime one of his employees came up with something good.

Early in his career, Nicola Tesla actually worked for Edison. However, Tesla resigned after Edison refused to pay the previously agreed upon modern equivalent of $1 million after Tesla fixed his direct current generators.

Later on, in an effort to discredit Tesla during the war between alternating and direct electrical currents, Edison resorted to publicly electrocuting dogs and cats with AC electricity while making false claims that it was too dangerous for public use. In 1903 he electrocuted and killed an elephant named Topsy while the Edison Manufacturing Company filmed it. The footage still exists. 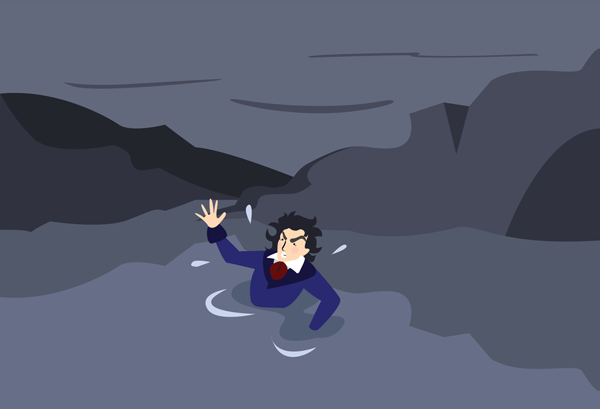 In the fifth circle, we find the wrathful and sullen wallowing in the River Styx. The furious souls fight one another on the surface of the river as the gloomy souls gargle beneath the water, closer to the riverbed. If we combine these souls into one entity, we may find a metaphor for suspected bipolar disorder.

Ludwig van Beethoven’s fits of mania were well-known by his personal friends. It’s said that during his low points are when many of his best compositions were written, while during his highs, he could compose multiple works in a single night. He developed a reputation for a quick temper and was even known for flying into rages at dinner parties and gatherings. 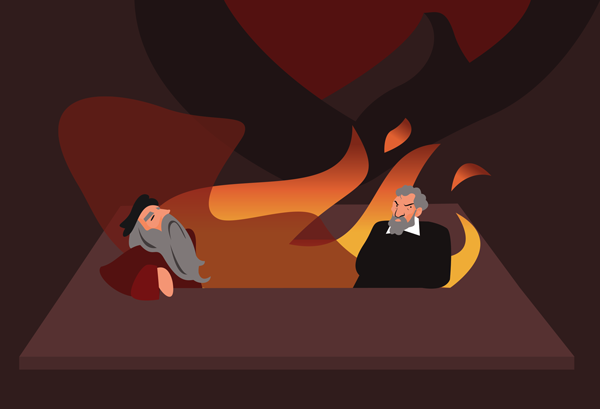 In this circle, Dante condemned heretics to flaming tombs for all eternity. These were prominent historical figures that he believed went against the catholic church. In the name of artistic and scientific progress, many renaissance icons could potentially be condemned to this same fate.

In the time of Leonardo da Vinci and Michelangelo, dissection of a human body was seen as a violation against God and was strictly illegal. Michelangelo began practicing dissection at age 18 and da Vinci is well-known for his sketches of dissected human anatomy. Many historians argue that without dissection neither painter would have been able to recreate the human body in the ways they did. Many of da Vinci’s anatomical sketches are still referenced by modern physicians today. 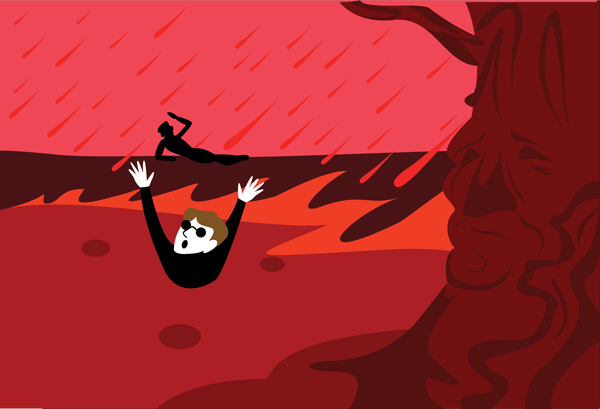 Dante divides this circle into three rings. Those violent to other people are condemned to sink in a river of boiling blood and fire. Next are suicides, those violent to themselves, who turn into trees and are ripped apart and eaten by harpies. The last circle is a desert of burning sand and fiery rainfall, reserved for blasphemers and sodomites, who Dante believed were violent against God.

In the first ring we may find John Lennon and Frank Sinatra, who were well-known for their involvement in domestic violence and spousal abuse, or Michelangelo Merisi da Caravaggio, a famed and controversial artist in the early 17th century. Caravaggio fled Rome to escape punishment for the attempted castration and murder of Ranuccio Tomassoni. Some historians believe Caravaggio was defending a prostitute at the time of the incident.

In the second ring, we could find one of the most beloved figures in American pop culture, Robin Williams. In 2014 the comedian took his own life at the age of 63 by means of asphyxiation. His wife, Susan Williams, blamed his death on Lewy Body Dementia, which can cause delusions, hallucinations and other health issues.

In the third ring, we could find one of the greatest journalists to ever play the game, Anderson Cooper. He’s a primary anchor for CNN and a correspondent for 60 Minutes. He originally made a name for himself after reporting in war-torn regions like Somalia, Bosnia, and Rwanda. He’s also “the most prominent openly gay journalist on American television,” according to The New York Times. Whereas it is abhorrent to think of sexual orientation as a flaw, Dante believed that it was. And for that reason alone, he would have condemned Cooper to the seventh circle of hell. 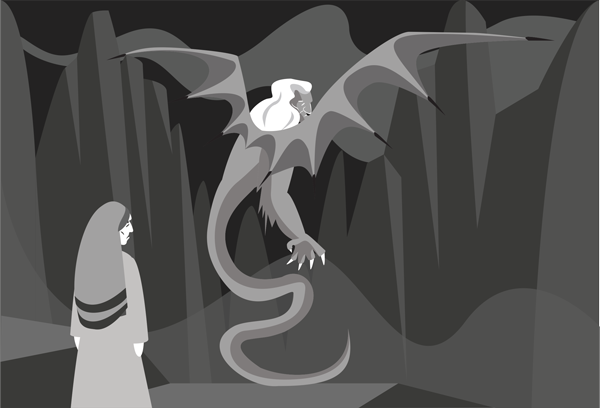 This circle is comprised of panderers, seducers, those guilty of simony, false prophets, corrupt politicians, hypocrites, thieves and falsifiers. In order for Dante to reach this circle, he rode on the back of Geryon, a flying monster from Greek mythology comprised of three different animals with conflicting natures to represent the fraudulent. According to Dante, he had the face of a man, the trunk of a serpent and the hairy limbs of a beast.

Here we may find Mother Teresa, who dedicated her life to fighting poverty. However, Mother Teresa also dedicated many of her works to hypocrisy. She spent most of her life campaigning against women’s rights around the world. She was a loud critic against contraception, abortion and divorce laws. However, she lacked the courage of her convictions when she flipped her stances in the face of high-profile friends like Princess Diana, who she publicly supported after her divorce from Prince Charles. 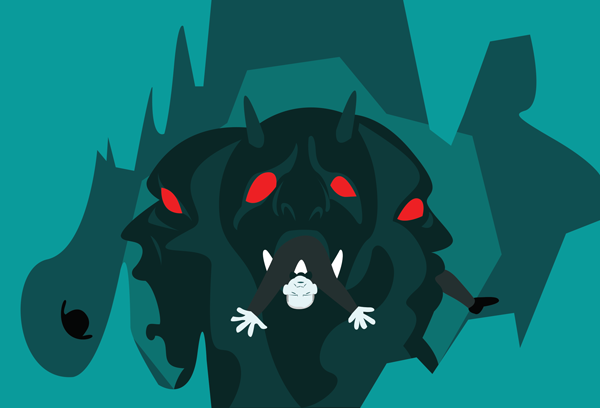 The ninth circle of hell is a frozen wasteland comprised of history’s greatest traitors. In the final level, Dante sees Satan himself as he chews Judas Iscariot, the betrayer of Christ, in his teeth for all time.

Winston Churchill, the former British Prime Minister often credited with single-handedly saving the United Kingdom during World War II, was responsible for the starvation and death of up to 3 million people who depended on him.

During the Bengal famine of 1943, which was originally caused by the imperial policies of the British, millions of Indians died of starvation after Churchill diverted food from India to British soldiers. When British officials pleaded with Churchill to send supplies to the region, he refused, saying “I hate Indians, they are a beastly people with a beastly religion.” At a war cabinet meeting he blamed the famine on Indians for “breeding like rabbits.”