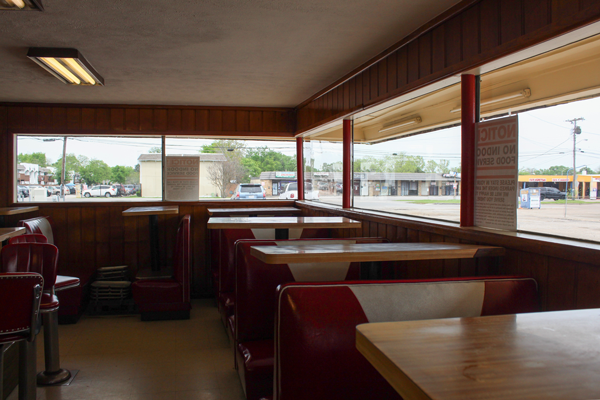 Dairy-Ette, a restaurant about 1.5 miles from Eastfield, sits empty on April 6 because of state-wide orders closing restaurants unless it’s take-out or delivery. Today, Gov. Greg Abbott said restaurants could open on Friday with a 25 percent occupancy limit. Photo by Baylie Tucker/The Et Cetera

Gov. Greg Abbott will not renew the statewide stay-at-home order when it expires Thursday.

All retail stores, restaurants, movie theaters, churches and malls can reopen Friday at 25 percent occupancy. Libraries and museums can also open under the same restrictions May 1 as long as their interactive exhibits remain closed. Businesses in counties with less than five reported cases can open at 50 percent occupancy.

Outdoor sports like golf and tennis can also start back on Friday, but these activities are capped at four people.

Abbott’s orders will overrule local governments and while he suggested citizens wear face coverings when out in public, his new rulings do not make it a requirement. He said no one can be punished for not wearing one.

Barber shops, bars, gyms and nail salons are not allowed to open in this phase, but Abbott said he hopes to reopen those businesses later in May.

“Just as we united as one state to slow COVID-19, we must also come together to begin rebuilding the lives and the livelihoods of our fellow Texans,” Abbott said at Monday’s press conference. “Our goal, of course, is to get those Texans back to work.”

The news is part of the three-phase plan to reopen Texas’s economy the government has been working on since March. A record 1.9 million unemployment claims have been filed and $2 billion in unemployment benefits have been paid out in the state, Abbott said.

COVID-19 rates in Texas have been on the decline in the last 17 days, Abbott said.

Abbott is confident about the downward trend of COVID-19 cases but said he is also trying to be cautious and open businesses in a strategic way that will allow them to stay open safely. The plan was constructed with the help of government officials, medical personnel, and the Center for Disease Control.

Dallas County averaged 83.7 cases a day last week, which was down from the previous week when it was over 100. Today, the county reported 91 new cases and two deaths, bringing the total number of cases to 3,105 and deaths to 84.

“Now it is time to set a new course,” Abbot said. “A course that responsibly reopens up businesses in Texas. We will open in a way that uses safe standards. Safe standards for businesses, for their employees, as well as for their customers. Standards based upon data and on doctors.”

If the rates of COVID-19 do not flare up within the next two weeks, Abbott said the state will move on to phase two.

He said the most important element of phase one is protecting the most vulnerable persons in our society. People aged 65 and older make up just over 20 percent of those who tested positive for COVID-19, however, they make up more than 75 percent of virus deaths.

“If we redouble our efforts to protect our most vulnerable senior citizens, we can reduce COVID-19 deaths while also expanding business operations and increasing the number of Texans re-entering the workforce,” he said.

During phase one, those age 65 and older are asked to stay home, if possible. If they need to get out, Abbott said businesses should give them special accommodations to limit their exposure to those who may be infected. He added that extra precautions will continue to be taken in senior living homes and facilities.

Phase two could begin as early as May 18 and will allow more businesses to reopen and the ones already open to expand occupancy to 50 percent. Further increases will be allowed as long as the virus is contained.

Abbott said that part of this plan will include more testing and that the state will soon be administering more than 25,000 tests a day. Currently, Texas has given 290,517 coronavirus tests, according to the Texas Department of Health Services, which is less than 1 percent of the state’s population.

— Harriet Ramos and Skye Seipp contributed to this report