Editorial: District should look for another option instead of cutting employees’ pay 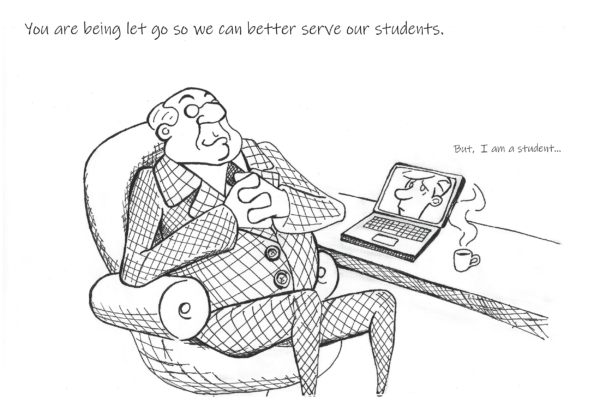 During what is the biggest strain on modern American life, the tension for some district employees has been cranked tighter as people are now worried about losing their income. Employees deserve job security, not more stress during this epidemic.

On April 6, Chancellor Joe May sent an email to all district personnel that said they would be paid through April, but after that it’s uncertain.

In the very next paragraph of this email, May announced the opening of a new talent pool search for high-paying administrative positions as part of the one college initiative.

That is unacceptable and a slap in the face to employees.

It’s also worth considering that part-time employees include students. Cutting their $10,000 a year salary with the DCCCD will not be the best way to serve them.

The budget was already set in August, and the district has emergency funds, so let employees be paid at least through May. At the emergency Board of Trustees meeting in March, Chief Financial Officer John Robertson said DCCCD has set aside $20 million particularly for expenses related to the pandemic. And at the last meeting on April 7, Robertson said the district still has $168 million in emergency funds above the $20 million.

While the Board of Trustees is known to be fiscally conservative, now is not the time to be parsimonious. It’s an emergency. Spend the money.

What’s more disconcerting is that it was not brought up or discussed at the board meeting last Tuesday. In an email response to The Et Cetera about the announcement, Trustee Chair Diana Flores said May and his executive team are monitoring the many different situations and challenges from COVID-19.

“It is the intention of the board, as it is with the chancellor, to have as little disruption as possible to our students and employees in this challenging time from actions that become necessary in response to the many impacts of COVID-19,” she said. “The board continues to take its policy role seriously, as we always have, making the best decisions for our major stakeholders — students, employees and taxpayers given the situations we face at any given time.”

Being good stewards of taxpayers’ dollars is appropriate and must be considered. But adding to an already overloaded unemployment system won’t be beneficial either. Nearly 1 million Texans filed for the first time from March 15 to April 11, according to the Texas Tribune.

During an emergency declaration, May has the ability to act alone, and so we address this to him. May: Your actions reflect the entire leadership team, and every administrative figure for the DCCCD will be remembered by how you handled this situation. You have a chance to be the leader who, during massive layoffs across the country, kept his employees on payroll.

We understand that some employees have jobs that cannot be done from home. However, consider paying these employees through the month of May, and let’s hope campuses open back up in June. If that doesn’t happen, then pay cuts across the board could be appropriate.

It’s an option that the parent company of The Dallas Morning News, A.H. Belo Corp., took. The company is cutting pay for everyone from the CEO to employees.

Of course, that company depends on revenue to operate. But one of the DCCCD’s methods of receiving money — enrollment — is up this spring to 80,455 from last year’s 77,287, according to district reports.

Not only is enrollment up from last year, but DCCCD is also receiving over $19.5 million from the CARES act for all seven colleges, according to the Department of Education. Half of that amount does have to be allocated to students, but that still leaves over $9.7 million for the district.

Now let’s consider other pay cuts in the district. Administrative positions in the DCCCD are typically six-figure paying jobs, with some pushing upward of $300,000 a year, while the chancellor makes about $437,000 a year, according to the Aug. 6 board agenda. It appears that people in these positions could lose 10 percent of their salaries and still be doing OK.

We are not saying these individuals are unworthy of the money they earn. We are saying it’s an option being used across the nation. As Dallas County Judge Clay Jenkins said at his March 21 press conference, “The whole lot of us have to move from selfishness to sacrifice.”

It appears the DCCCD is on solid ground and can float their employees for a month longer. But do not begin throwing away employees and then hire more administrators as a part of one college. If that’s the case, then we suggest holding the initiative until the pandemic is over, as all resources should be focused on dealing with this crisis.

While The Et Cetera ran an editorial in support of one college back in February, and we still stand behind the initiative being beneficial to students, that was pre-pandemic.

The choice is yours. But laying off employees is the wrong one.

I also want to point out that leadership has been very concerned about continuing to pay part-time employees. As you know, as an organization we are experiencing a tremendous amount of change and the pandemic has added a heap of uncertainty to an already challenging time of transformation. That said, I am personally committed to extending grace to our leadership and to my colleagues as we navigate this together.