Leaving the field after a 6-5 loss to rival Richland on March 12, sophomore outfielder Gabriel Vasquez didn’t know that

would be the last game he would play that season. He was leading the team in several categories including hits (40), RBIs (26), and batting average (.417).

And just like that, it was over. The season was canceled. His dreams of a national title were crushed. Shock and disbelief filled his mind as his aspirations vanished.

“We had a shot at winning, and now we don’t because of this virus,” Vasquez said.

Amid the COVID-19 pandemic, Eastfield, like most other colleges, has seen its athletics come to a halt. Baseball was the only ongoing sport at Eastfield before the campus closed. Now, there are no games being played after the decision by the National Junior Collegiate Athletic Association on March 13 to suspend all upcoming competitions due to COVID-19.

The decision wasn’t a complete shock to the Harvester baseball team.  They were aware of the situation with the coronavirus, but Vasquez said they kind of joked around as a team about the thought of having their season canceled because of the virus.  

Eventually, their jokes became a reality. As the team saw the National Collegiate Athletic Assocation cancel all of their sports, they realized it wouldn’t be long before the NJCAA followed suit. 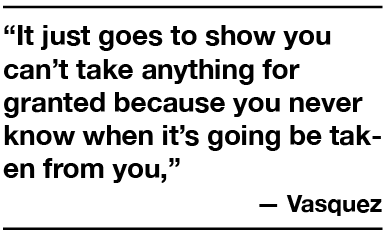 Head coach Michael Martin broke the news to his guys the following day that the NJCAA had suspended their season. On March 16, the NJCAA announced all athletic competitions were cancelled for the rest of the academic year.

“It just goes to show you can’t take anything for granted because you never know when it’s going be taken from you,” Vasquez said. “We’ve been playing really good recently, and we genuinely had a shot to win a national title. There’s no doubt in our minds that we were going to win. And for that to be taken away from us, now we’ll never know.”

Fortunately, players will regain their year of eligibility due to the season not being finished, Athletic Director Anthony Fletcher said. Therefore, they will have the option to move on and play their final three years at a four-year university or return and play another year at Eastfield. A few sophomores have already signed to four-year schools for next season.

The Harvesters will be losing some key sophomores including infielder Brady Robinson who will be playing at Centenary College of Louisiana next season and first baseman Keylon Mack who is heading to Division 1 Grambling State University, also in  Louisiana. Mack led the Harvesters with six home runs and 24 walks on the year. 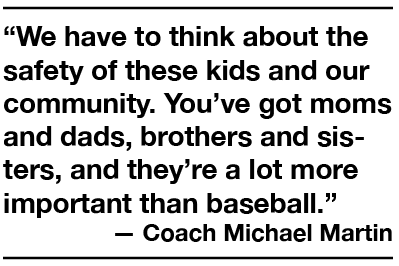 University in Kansas next year. Martin said he wants to see his players make the most of their opportunities to play at the next level and that either way Eastfield will have a strong core of returning players next season. Some sophomores are still waiting to decide whether to come back and play another year or not.

The Harvesters finished their shortened season with a record of 19-9, were ranked No. 5 in the country and were riding a nine-game win streak before the loss in their final game. Martin said he is upset about how their promising season came to an end but understands why the sacrifice had to be made.

“This is bigger than we expected. It’s looking like it’s going to be a while, and rightfully so,” Martin said. “We have to think about the safety of these kids and our community. You’ve got moms and dads, brothers and sisters, and they’re a lot more important than baseball. If this is what we have to do to ensure everybody’s safety and well-being, then that’s the small price we have to pay to go without a year of baseball. But it was a little shocking and disappointing.”

The state of Eastfield athletics and the rest of the sports world remains uncertain. Fletcher said his goal as athletic director is to be ready for sports to start again in August, and is using the extra time to get a head start on recruiting for basketball next year.

As far as the virus goes, he knows there’s not a whole lot anyone can do about it.

“It’s not something we know much about,” Fletcher said. “We’re trying to get as much information as we can. Some of the information is good, some of it is bad. It’s kind of scary, but we’re just trying to figure it out. … Hopefully everything gets better. That’s all we can hope and pray for.”

Robinson, who was batting .400 with 11 RBIs, eight runs and seven stolen bases this season, said he can’t help but think about what could have been for the Harvesters this season.

“It’s hard to know. Our season got cut short when we were capable of possibly going to Tennessee and winning a national title,” Robinson said. “ [The coaches] taught me a lot in my two years at Eastfield. [And] the guys, I love every one of them like they’re my brothers.”

By SKYE SEIPP @seippetc “Do you ever think we’ll be the last generation of kids?” This wasn’t an existential crisis. Just a question posed by one 11-year-old to his sisters while playing a video game […]

We commend the Dallas County Community College District for its responses to the novel coronavirus. In a time when many universities struggled with what options to take as life began shutting down, employees in the […]

By HUNTER GARZA @HunterTateEtc The social sciences department was prepared to transition online in case of an emergency. Associate Dean and psychology professor Dora Falls-Saucedo said that the pandemic was not one of the reasons […]