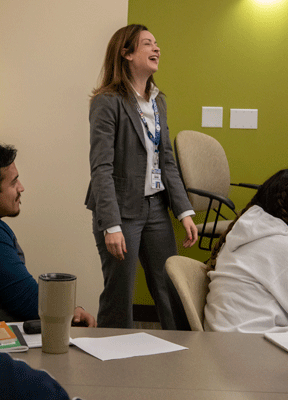 Philosophy professor Kristina Hunsinger moved to Dallas to pursue a doctorate four years ago. She’s originally from Connecticut but has moved around the country for her education.

She’s also a certified yoga instructor and has travelled to India multiple times. She sat down with The Et Cetera reporter Eson Fellers to delve deep into interests, such as Socrates and her yoga filled trips to India.

WHAT DROVE YOUR DECISION TO FOCUS ON ETHICS AND RELIGION?

I teach ethics, introduction to philosophy and world religions. I don’t think that I was focused on world religion in my academic path, but the opportunity to teach it came up at the college. Ethics, I think, is one of the few practical areas of philosophy, but the reason why I’m into any of it is really owed to having great instructors.

WHO IS YOUR FAVORITE PHILOSOPHER?

I enjoy Socrates. I see him as the mascot for philosophy. The first person who got me into philosophy, who I owe a lot of credit to, is Dr. Nalin Ranasinghe. He’s a Plato scholar and he’s brilliant. He really understands Plato. I think because I studied under him, he really animated who Socrates was. It will always be important to me.

WHO ARE YOU OUTSIDE OF SCHOOL? WHAT ARE YOUR INTERESTS?

This is my life. I’m very consistent. I’m still the same person. In my personal life, I still love philosophical dialogue, all that. I love to read. I also practice yoga. It’s a big part of my life.

YOU TOOK A TRIP TO INDIA AT ONE POINT. IS THAT WHAT INFLUENCED YOUR FOCUS ON YOGA?

Yoga is what influenced my trip to India. I started practicing here at the Dallas Yoga Center in 2015. So, Jan. 1 in 2015 is when I took my first yoga class. I wanted to do a teacher training, so that’s why I went to India for the first time.

HOW MANY TIMES HAVE YOU BEEN? 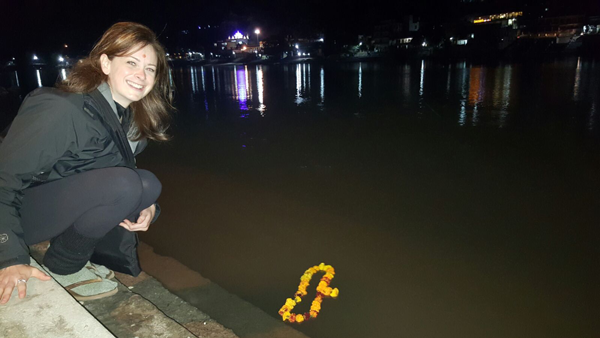 Kristina Hunsinger puts her flower mala in the Ganges River. She received the mala for completing her 200-hour yoga teacher training in Rishikesh, India. Photo courtesy of Kristina Hunsinger

WHAT WAS YOUR FAVORITE EXPERIENCE THERE?

Where I go to is called Rishikesh, in northern India. It is known as the birthplace of yoga. That may not be true, but if you talk to people from Rishikesh, they will tell you it’s true. It is on the river Ganges, and it’s beautiful. It is a place of spiritual pilgrimage for a lot of Hindus. There are three brothers there who I go to study under, the Gushang brothers. I feel like I have people there. I have this community I can go visit.

When I went there for the first time I just fell in love with it.  I like that when I go there, it’s a retreat. It’s like everything else disappears, and I can be fully immersed in this experience.

SO, YOU DON’T DO A LOT OF TOURISTY WHEN YOU GO THERE? YOUR MAIN FOCUS IS YOGA?

There are little adventures into the city when you have free time. With the teacher training programs that I have done, you have to get so many hours to get a certification, and you only have one month, so I cram it in. I got married last summer. Then soon after I got married, I had planned to go to India. My husband decided to join me at the tail end of my teacher training. That’s when we really traveled quite a lot, and traveling in India can be really difficult.

DO YOU LISTEN TO A LOT OF CLASSICAL MUSIC FOR MEDITATION?

I like that stuff, but I’m pretty flexible with the kind of music I listen to. I like a lot of spiritual talks. Lots of talks by Ram Dass.

I WAS ACTUALLY GOING TO ASK IF YOU’VE EVER READ “BE HERE NOW.”

I love that book. It’s so important. I find him very inspirational too. For music, I grew up with a lot of 90s grunge, and I like to still listen to that. If I’m listening to music, that’s probably what I’m listening to, but I have very flexible tastes.

I WOULD’VE NEVER GUESSED THAT.

Yeah, I used to really like Nirvana. As a punishment, like being grounded, my mom decided- this is how obsessive I was about this band- she said, “no more Nirvana.” She took away all my CDs, all my shirts, anything that had Nirvana on it. I just started to draw things instead because you can’t take that away.

DID YOU CONTINUE DRAWING AT ALL?

I love creativity and self-expression. I tried to draw. It’s nothing I’ve ever been good at. I used to play guitar as a kid.

GOING BACK TO YOGA, DO YOU FEEL THAT YOU’VE NOT ONLY ADVANCED SPIRITUALLY, BUT PHYSICALLY? CAN YOU PUT YOUR FOOT BEHIND YOUR HEAD?

Yes, I can. When I first started, I couldn’t touch my toes. One of the wonderful things about the practice is there’s such a depth to it.

IN YOUR PERSONAL LIFE, WHAT HAS BEEN YOUR GREATEST CHALLENGE, OR YOUR BIGGEST SUCCESS?

Going through a divorce and everything, obviously that was awful. Nowadays I really appreciate that relationship in its context, and really understanding what that was. That transition, as difficult as it was, now that I’ve found that person that’s really right for me, it’s the happiest thing.

Editor’s note: This interview was edited for style and brevity.