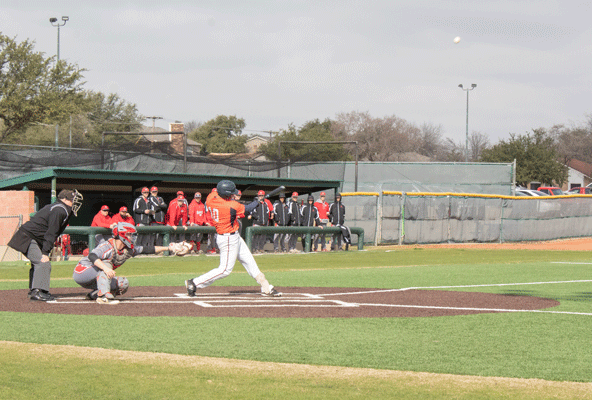 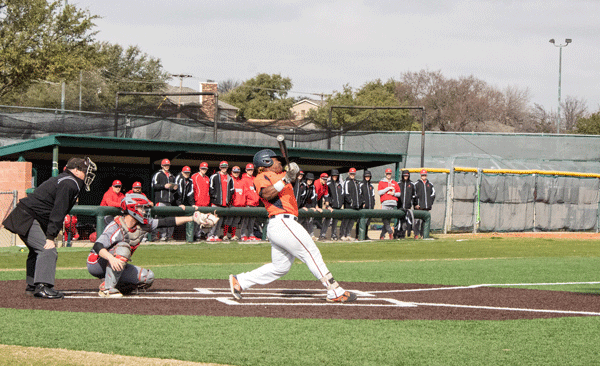 Keylon Mack swings at a pitch during the first game of the season against North Arkansas. Photo by Baylie Tucker/The Et Cetera

Harvester baseball is back for 2020 and they have their sights set on their first conference title since 2016.

Eastfield is trying to bounce back after last year’s disappointing 26-22 season that ended with a playoff loss to North Lake. Harvesters opened play Jan. 31  against North Arkansas. They go on the road to Blinn College Feb. 7.

The Harvesters will look to their 11 returning sophomores to lead the team this season after losing 12 from last year. First baseman Keylon Mack and outfielder Gabriel Vasquez are a couple of key pieces coming back after making the All-Star game last year. Vasquez led the Harvesters in multiple categories last season including hits (50), home runs (10) and RBIs (52).

He believes this year’s team is primed and ready for a great run.

“Everyone on the team can hit, for sure,” Vasquez said. “Defensively, we’re a lot better this year too. We have more depth in pitching, our infielders are a lot better and our outfielders feel more confident this year as well. …This year I think we’ll be better and stronger, and we’ll definitely go farther.”

Mack, who ranked second on the team in home runs (4) and RBIs (33) last season, believes the returning sophomores can make a difference with the experience they bring to the team.

“Last season we didn’t come out like we wanted to, we came out really flat,” Mack said. “The whole season we battled ups and downs and we just didn’t do what we needed to do. We didn’t execute when it came time to execute and ultimately, we lost.”

As a team last season, the Harvesters scored 340 runs and hit a respectable 38 home runs. However, they managed to post just a .266 team batting average. Consistency was a struggle last season, allowing some important games down the stretch to get away from them.

This fall, improving at the plate has been a main focus point for Martin. The Harvesters have had some high intensity practices leading up to the start of the season. 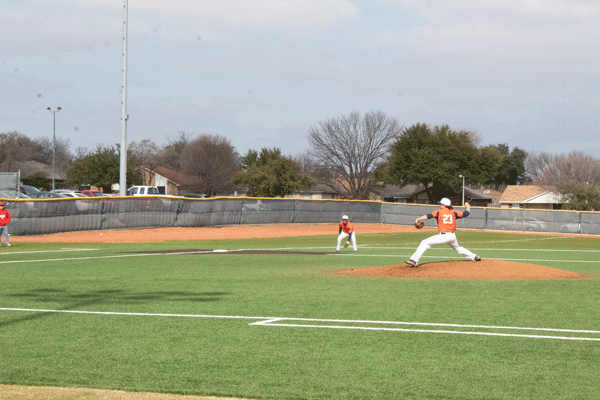 Landon Roberts throws a pitch in the Harvesters 9-1 vicory over the Pioneers on Jan. 31. Photo by Baylie Tucker/The Et Cetera

A few players mentioned that a lack of team chemistry was another problem that held back the team last season. So, this year the players participate in team chemistry-building activities that forces them to work together every Thursday. They play games together, go out to eat together, and the team have bonded more because of it. Vasquez and others agree that now they feel closer as a team.

Outfielder Travarus Ansley, infielder Brady Robinson and pitcher Jared Tipton are a few more returning sophomores who are looking to make a play a big role in this experienced lineup.

Ansley ranked second on the team in runs (40), hits (49) and walks (33) last year. The Harvesters will need him to continue to get on base frequently to create scoring opportunities. Ansley says the guys have been ready to get out and start playing for some time now.

“We look great,” Ansley said. “I think we’ve got a good chance to do something special this year. We’ve been waiting. We’re licking our chops.”

The Harvesters will also look to some of their new additions to make an impact this season.

Freshman first baseman Angel Rodriguez out of Tyler, Texas will add a big bat to the lineup. Braxton Briones from Iowa Park, Texas is another freshman that has shown promise in practice.

The Harvesters’ lineup will be more versatile this year. Many of their players play multiple positions around the diamond, including several freshman like Ethan Jeske from Tyler, Chris Dickens from Iowa Park and Carlos Lopez out of Dallas.

Thanks to an influx of new players, 13 freshman and 1 sophomore transfer, who can be called on for different tasks and situations, the Harvesters boast a deep roster this season.

“We’re excited about the opportunity ahead of us, and I think we got a good chance to compete at the top of this conference like we have every year,” Martin said. “We look forward to this year and we have some kids that ought to lead us to the opportunity of winning the conference.”