Opinion: At home tattoos cost more in the long run 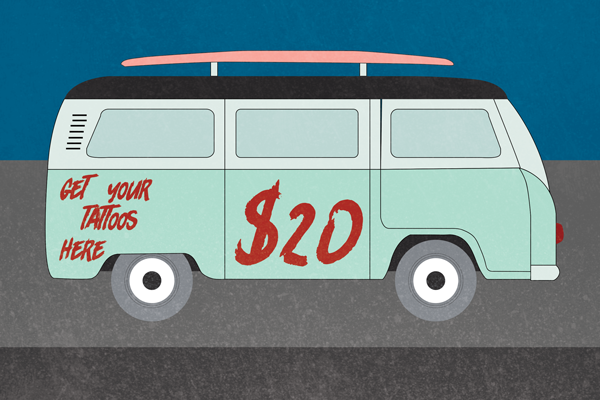 At-home ink-slingers spit in the eye of everything so many rabble-rousers and mischief-makers have literally bled for to build.

Tattoo culture is comprised mostly of heathens and rule breakers. To say there are a few cardinal rules that must be followed may sound a bit odd, but even the most degraded of subcultures must have a general code of ethics to adhere to.

This isn’t a matter of a misspelled tattoo or a blown out line. These mistakes are forgivable in the heart of your average god-fearing heathen.

This concerns the one unforgivable sin in tattoo society. Thou shalt not buy a machine online and call yourself an “artist.”

Tattooing is one of the most difficult lines of work to break into. One cannot simply walk into a shop and ask for an application. The only way to get into the business is through an apprenticeship under an already established artist. A process that is easier said than done. Many artists aren’t so keen on the idea of handing out hard earned secrets of the trade to any kid that wants to learn. You must first establish “shop presence.”

That simply means hanging around the shop regularly, getting tattooed, spending money and establishing a friendship with the artist. Then one day, pick up a broom and start cleaning shop. If nobody stops you, then congratulations, you might have a shot at an apprenticeship.

It’s a slow process. Dues must be paid and the opportunity earned. This is the way of the ink-slinging world. But a new breed of morally bankrupt halfwits have evolved to the foreground of modern tattooing. The at-home “tattoo artist.”

It seems like everyone has a cousin, or “knows a guy,” that can do a full sleeve for $150 in the back of their garage or van.

These are the same people that are ignorant of common-sense variables like the amount of detail you’re looking for in a tattoo. A decent sleeve usually starts at a minimum of one grand and can raise much higher depending on these variables and who your artist is. It takes a special kind of stupid to allow one of these idiots to put a needle in your skin.

You deserve the staff infection you’ll most likely get and no one in tattoo society will have an ounce of sympathy for you.

However, the one that really deserves the staff infection is the do it yourself chicken-scratch “master” that bought a cheap tattoo machine online and decided to call themselves an “artist.”

Tattoo machines (not a tattoo gun) are an art-form all by themselves. Many artists even go as far as taking up metalwork so they can make their own machines.

They constantly trade out parts like baseball cards with each other. It’s sacred, and the fact that some idiot can order a junk machine from Amazon is disgusting. This is the same breed of moron that will clean a fresh tattoo with straight rubbing alcohol then proceed to wipe it down with cheap toilet paper. As you may imagine, not a fun way to treat a fresh wound.

But the do it yourself tattoo dunce may not know any better, one could argue. They don’t know because they never bothered to learn.

You’ll often hear the argument, “they have to start somewhere.” I completely agree. Start in a shop.

Like the dope that cuts to the front of a line, ignoring everyone waiting behind. They ignore the structure of society. Thinking that the rules don’t apply to them, till they finally get hit in the head with a brick because they cut in front of the wrong guy. To skip the processes, is to get yourself hurt.

But there is a hidden silver lining when it comes to the do it yourself ink-slinger. Inevitably, someone will have to fix or cover up that Jackson Pollock nightmare of a tattoo. And cover-ups aren’t cheap. They cost double the price on average due to the doubled labor of the artist to cover up someone else’s mistakes.

In the end, the real artist will always get paid. Save yourself the time, money and trouble, get it done right the first time.

—Jordan Lackey is a staff writer and journalism major