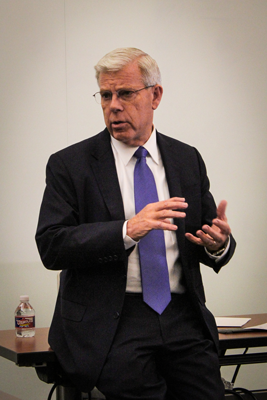 Chancellor Joe May speaking to a group of student journalists at a luncheon on Nov. 25. Photo by Anthony Lazon/The Et Cetera 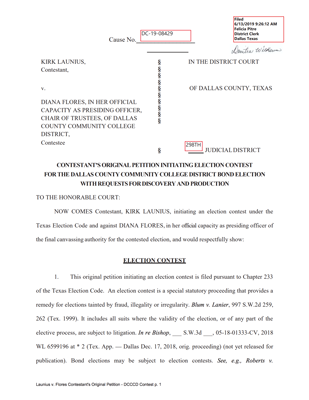 The 18-page petition filed by Kirk Launius on June 13.

An election lawsuit by an Eastfield criminal justice student has impeded the Dallas County Community College District from cashing in on the $1.1 billion bond election it won by a 71 percent margin on May 4.

Kirk Launius, the former Dallas County sheriff GOP candidate filed the contest June 13.  His profile on the website Linkedin said he has attended Eastfield from 2011-2019.

The lawsuit includes an 18-page petition and nearly 4,500 pages of documents to back up Launius’ claim of voter discrepancy during the election.

Launius declined to comment to The Et Cetera while the case is in litigation.

Chancellor Joe May said last week that he is not worried about the contest overruling the election, citing the margin of victory as being too large.

“It’s frivolous,” May said. “While there may even be some merit in some of the things they point out for the county, it’s not enough to impact the overall passage of the bond. But it’s definitely going to delay us.”

While the lawsuit is holding the district back from selling the bonds, May said the district is still moving forward with some of the projects by paying with available funds.

Plans to expand El Centro’s west campus and Cedar Valley’s heating, air conditioning and ventilation lab as well as construction of a science building at North Lake will continue despite not having the bond money.

May said the district will pay itself back after cashing the bonds.

Following a Nov. 14 D Magazine article about the lawsuit, May sent an email to district employees saying the lawsuit isn’t questioning the integrity of the bond, but on voting irregularities within the county during the election.

“While I am disappointed that this lawsuit will slow the progress on some of our larger projects, such as the downtown hub and the new El Centro campus, I am encouraged to know that the majority of the voters, business and community leaders in Dallas County support our efforts,” May said in the email. 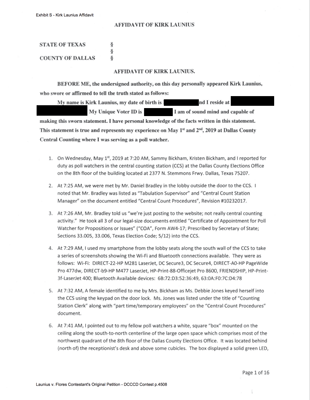 The suit says that during voting, “a plethora of computer tabulation irregularities, mistakes, illegalities and obstructions were witnessed by official watchers.”

The petition calls for a revote, sighting two scenarios where the voter discrepancies being wrongly counted would cause the vote to be overturned.

The three affidavits by watchers brought up various problems including the lack of a judge presiding over the Central Counting Station, seating issues for watchers and accusations of seperate Counting Station set up in another room.

Launius’ petition asks for $100,000 in damages and for the vote to be considered null and that a new election take place.

History professor Matt Hinckley said it’s disappointing that the district is going to be slowed down in moving forward with the bonds.

“We need these resources so we can meet the needs of our community and of our students,” he said. “It’s just beyond frustrating that something like this would slow that down.”

Hinckley said buildings like F, A and parts of C are in dire straits, and this issue will only stop the construction of new buildings to replace them.

These buildings sit on a man-made hill from when the college was built and currently face stability issues.

“Our college alone has desperate need for new facilities just so we can keep doing what we’re doing now, much less handle the influx of additional students with additional needs that we’re going to have in the next 50 years,” Hinckley said.