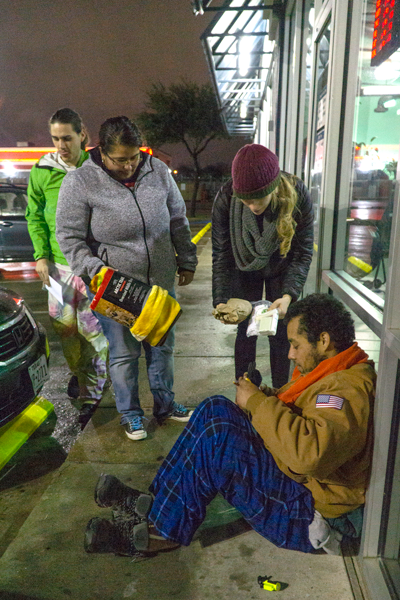 Mayra Fierro, in the grey hoodie, offers a blanket to a man during a homeless youth search in February. She spoke at the Day of Action: Housing Insecurity event on Nov. 15. Fierro is a student at Eastfield and has been homeless before. Et Cetera file photo

In an effort to inform the Eastfield community on homelessness, student Mayra Fierro led an interactive discussion at the Day of Action: Housing Insecurity event on Nov. 15.

Fierro leads the Cereal and Civil Rights group in Deep Ellum. Cereal was initially intended for advocates, activists and organizers, but is now open to all. Meeting the first Saturday of the month Cereal attendees gather to have their favorite cereal, watch old fashioned cartoons and cover topics such as consent, immigration, intersectionality and LGBTQ pride.

Fierro has experience helping homeless youth and has been homeless before. Although  she still struggles financially, her past drives her to help the homeless youth community in any way she can.

“They are poor, we are poor, I am poor,” Fierro said interconnecting herself with housing insecure students as she opened the discussion on homeless youth in the Dallas County Community College District.

Members of the group sat at a round table to discuss how individuals become homeless, what challenges they face and how to help.

Throughout the discussion members wrote their thoughts down on one large note pad as different topics, such as the various categories of homelessness, arose. By the time the two-hour discussion was over the note pad was full.

When the question “what comes to mind when everyone thinks about homeless people?” was asked, the answers varied.

Some associated homelessness with substance abuse, and others thought that being homeless meant living outside. This isn’t always accurate.

Other forms of homelessness include living in a car, couch surfing and long extended stays at motels.

According to the Urban Institute, homeless youth prefer to hang out in public settings like bus depots, fast food restaurants or malls.

The Housing Choice Voucher Program assists low income families, the elderly and the disabled to afford housing in the private market.

Homeless youth struggle to obtain housing vouchers, and when they do, the housing facilities that accept them are poorly maintained.

“Disabled people who were on top floors of housing facilities were unable to come down for days and sometimes weeks because of elevators not working,” Fierro said. “And as soon as they were able to get out, they had nowhere else to go because their vouchers weren’t accepted.”

Aside from the general homeless youth population the group spoke out about the personal conflicts their own students face.

Danae Bass, program coordinator for the Center of Equity, Inclusion and Diversity said many homeless students will come to talk to her.

“It’s hard because we don’t have a dorm,” she said.  “Many times I’ll try using other connections, but a lot of the shelters are not close to here and we have a big transportation issue. I have some students now who are living in their cars, and I’m trying to find ways to make it at least more comfortable, because we can’t change that for them right now.”

Bass runs the Honeycomb Cupboard as well as the mobile food pantry on campus. Both offer a variety of foods and toiletries to students in need. She hopes to expand the pantry, but limited space is an issue.

“We have lots of big dreams that we’re not going to give up on, but right now with space issues that is all that we can have,” she said.

Once there is extra space for the pantry Bass plans on adding refrigerated foods and opening a clothing closet.

Other plans inclue opening a mobile food pantry at the Pleasant Grove location, as well as expanding food pantry hours, has also been in the works.

While these steps address some needs of housing insecure students, additional suggestions included increasing student volunteers, having professors offer extra credit to students who attend these events and speaking up about the topic at hand.

“I learned how a lot of systems of oppression such as food insecurity, healthcare expenses and lack of childcare intertwine with housing insecurity,” Schlarb said. “Making it extremely difficult to become financially secure.”

Schlarb said students will certainly see more events on social justice topics like housing and food insecurity from the Center of Equity, Inclusion and Diversity.

According to Schlarb, the next Day of Action event on food insecurity is set for Feb. 26.

To wrap up the discussion, Fierro spoke out about needing more people to come together to help each other rather than consistently relying on shelters and organizations for help.

“I think that we need a much broader community response,” Fierro said. “And it’s not going to be made up of agencies. It’s going to be actual individuals who care, because that’s who makes a difference.”