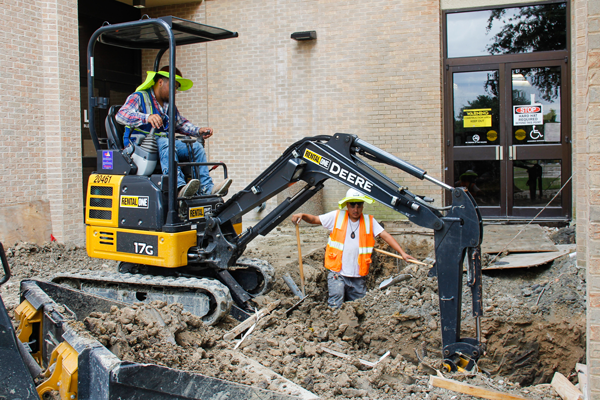 Construction workers outside of L Building dig up the ground. Photo by Rory Moore/TheEtCetera

Construction in the L Building, originally meant to be finished by the start of the fall semester, is upgrading L-108 to compensate for overcrowding- ing and older technology.

The construction on the L Building and portable buildings is expected- ed to last until at least December, or January.

“I’m having three station soldering labs put in, and the space between those two rooms will be new storage,” said Russell Dale, mechatronics and electronics professor.

He said that it was difficult to increase class offerings in electronics and mechatronics with such limited space. 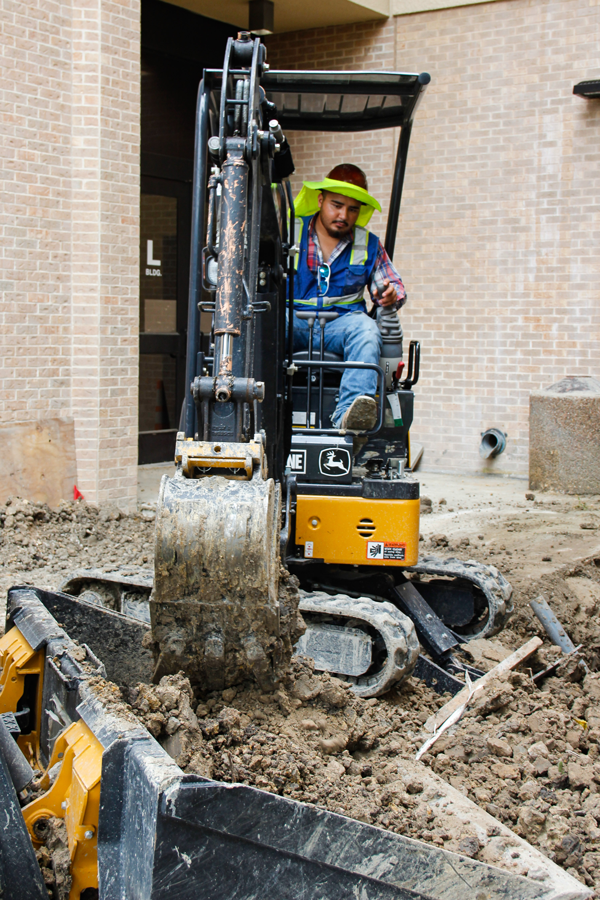 Construction in the L Building to bring renovations to the mechatronics lab is expected to take place until December or January. Photo by Rory Moore/TheEtCetera

Michael Brantley, facilities director, said that modernization has been a huge focus during the expansion. Larger equipment pieces, like circuit panels, will be able to be used more regularly in a larger space, with higher ceilings and bigger windows.

“The labs will be taller and will be able to handle all kinds of equipment on a more industrial scale,” he said.

The mechatronics department was formed in 2006, and some of the equipment used in classrooms today is from the 1980s.

Sharon Cook, college spokeswoman, said the work will be loud and will probably cause vibrations in the L building and surrounding areas.

“They’re trying to do the work early in the mornings, as far as the noise, and then even later in the day,” she said. “The area is fenced off, so pedestrians and staff should be avoiding the area.”

Alongside the L-108 improvements, a portable building has been added to Parking Lot 6 to accommodate the large amount of high school students on campus for dual credit and early college high school.

Brantley said this 5,200-square- foot building comes with two classrooms, but they plan on adding two more classrooms, as well as some restrooms and a lounge area.

Brantley said the city of Mesquite’s permitting process and construction problems have delayed the building’s completion.

“We had hoped that we would have that open by Aug. 23, but the city processes have slowed that project,” he said.