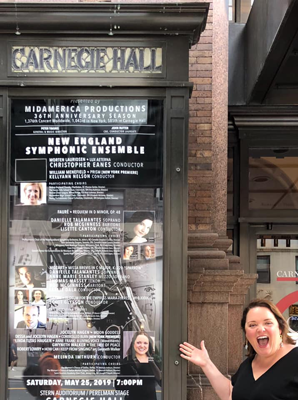 Melinda Imthurn had over a year to prepare the music she was going to perform at Carnagie Hall in New York. Photo courtesy of Melinda Imthurn

Melinda Imthurn stood on the sidewalk outside of Carnegie Hall in New York City. She posed for a selfie beside a poster featuring the musical groups that were scheduled to perform that Saturday evening.

Toward the bottom-right of the poster was a picture of the conductor for the performances. A woman standing nearby looked at Imthurn, then at the picture on the poster, and cried out: “That’s you!”

Imthurn, Eastfield’s director of vocal studies, had the opportunity to participate in two major musical performances this summer. The first took place at the world-famous concert venue Carnegie Hall with Imthurn as the conductor. The second took place at the American Airlines Center in Dallas with Hugh Jackman.

Imthurn said that she spent more than a year preparing for the event at Carnegie Hall. She chose music written exclusively by women composers. The community choir that she directs, the Women’s Chorus of Dallas, joined her onstage for the May 25 performance.

“I felt very calm and was able to just enjoy the music,” Imthurn said. “It was really a wonderful experience.”

Eriene Resendiz, a member of the Women’s Chorus and a music major at Eastfield, was one of the singers at Carnegie Hall. She said that it was amazing to perform in such a famous place.

“It was a once-in-a-lifetime experience,” she said. “I don’t know if I’ll ever get to go back, but I went one time and that fills me up.” 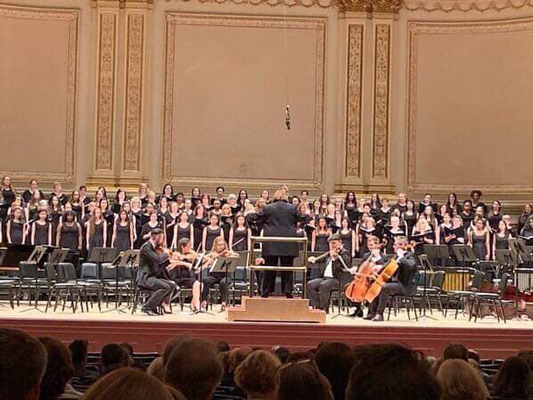 Imthurn, stands with her back faced to the audience. She conducted a show at Carnegie Hall where she performed with her group, the Women’s chorus of Dallas and said she chose music strictly written by women for the concert. Photo courtesy of Melinda Imthurn

Imthurn and the Women’s Chorus returned home from New York City just in time to prepare for the concert with Hugh Jackman’s international tour, “The Man. The Music. The Show.”

Imthurn said Jackman’s group likes to include choruses from the communities where their concerts take place. She said she was surprised when Jackman’s group asked the Women’s Chorus to participate in the June 19 performance.

“They sought us out,” Imthurn said. “It was just our good fortune that they contacted us.”

Unlike Carnegie Hall, the Jackman invitation was last minute. About 10 days before the performance, Jackman’s chorus manager sent Imthurn the music to practice with her choir.

On concert day, the Women’s Chorus arrived at the American Airlines Center early to rehearse with Jackman’s band.

Jackman himself came in about half an hour before show time and took a picture with the choir.

Erin Giles, a Women’s Chorus member, said meeting Jackman was the highlight for her.

“He came in and he was like really encouraging,” Giles said. “He said, … ‘Just do your best. We want you to have fun.’ And he thanked us for being there.”

Imthurn’s role in this event was to prepare her group to perform. Once they were ready, she stepped backstage and experienced the exhilaration of watching her choir perform “A Million Dreams” by Benj Pasek and Justin Paul and two other songs with Jackman.

“That’s the heart of a teacher is you love to watch the success of your students,” she said. “You enjoy watching their success more than you would enjoy doing it yourself.”

She said her success with the Eastfield Choir and the Women’s Chorus of Dallas is due to the training that she received in vocal pedagogy.

Though her work at Eastfield keeps her very busy, Imthurn feels that performing in outside endeavors is a way to practice her art. She is motivated by a passion for music.

“I love it,” she says. “If you love what you are doing, you want to do it as much as possible.”