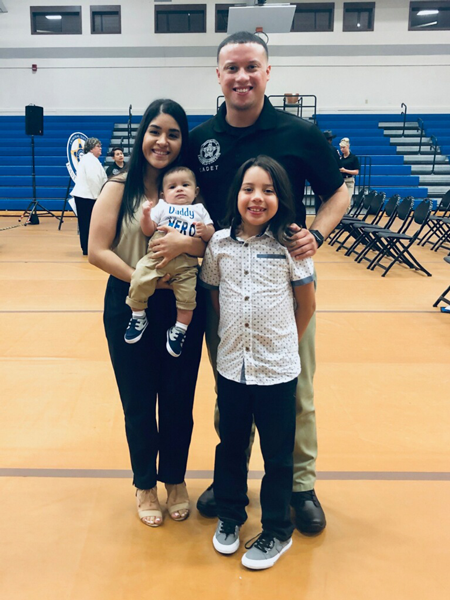 Walter Cortez looked out the sliding glass door of his first-floor apartment in Old East Dallas to see chairs and umbrellas from the pool being lifted into the sky. He searched for his phone but couldn’t find it, and as he peeked out again, he froze as he watched a crane collapse into the building across from him.

“Just a loud boom,” he said punching his right fist into his left palm. 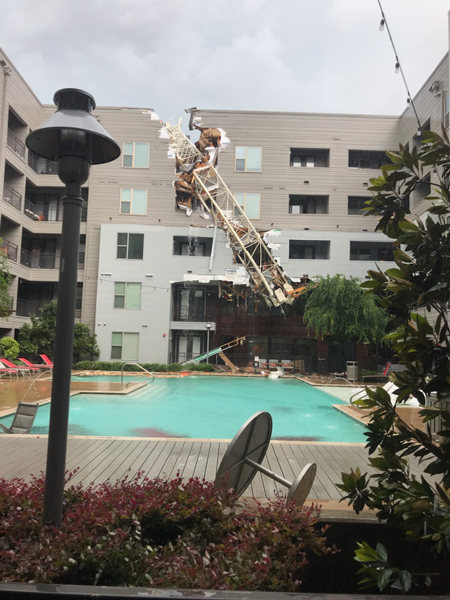 Due to the accident, none of residents are allowed to move back to the complex. Courtesy of Walter Cortez

Cortez is a volunteer firefighter for the city of Cockrell Hill and is a recent graduate of the Eastfield Police Academy. He was watching his 3-month-old son, Micah, and studying for his exit exam on Sunday, June 9 when the sky turned black and the wind began ripping through his apartment complex, Elan City Lights.

The storm produced blistering winds up to 70 mph and power outages to more than 360,000 residents throughout the metroplex. While Cortez and Micah escaped unharmed, the crane accident killed Elan City Lights resident Kiersten Symone Smith and injured several others. More than 500 people lived in the complex and none of them are allowed to move back in.

Donations for the family can be dropped off in the W Building or in the president’s office.

Just before the storm, Cortez said the sun was out and he saw a man and a woman at the pool. After evacuating the building, he saw that same man bleeding from his back and the woman in a chair with her eyes rolled back, bleeding from her foot.

“I saw it [the crane] coming toward my side of the building,” Cortez said. “I had no reaction. I just stood there and blanked.”

At that moment the fire alarms began to blare and Cortez reached for his phone to call his wife, Stephanie Araujo. She was at Baylor Hospital in Irving, where she works as a registered nurse.

“I remember breathing so hard and my words were too short,” he said. “I was like, ‘We need to get out. The apartments have been damaged. They’ve been crashed with a crane. And we need to get out.’”

Araujo was with a patient when Cortez first called her. She looked out the window to see the wind blowing and wondered if the city was expecting a tornado.

“It was complete shock,” Araujo said. “I didn’t know what to say. … I just hear him breathing heavily and saying ‘What do I do now?’”

Araujo asked if she could leave work, but the hospital was busier than usual that day and her manager wouldn’t let her go, she said.

Cortez told her they were being asked to evacuate the building, but Araujo said she was worried about them being outside during a storm if the winds were still high.

Luckily Cortez’s car was safe. But at the time the roads were blocked and residents couldn’t get to their vehicles.

“That in and of itself was stressful,” Araujo said. “Knowing that they had no way out of there and I’m stuck at work was very, very stressful.”

Micah slept through the whole accident. He awoke when his dad had to get them out of the building.

“I know he doesn’t understand what I tell him, but I was talking to him,” he said. “I remember telling him, ‘We’re going to be OK.’ … I looked him in the eye and was just telling him that ‘Daddy’s going to take care of you.’”

Cortez put Micah in his stroller and only had enough time to grab Micah’s diaper bag and formula before evacuating.

Residents were then directed by officials to make their way across Live Oak Street to the Latino Cultural Center.

“They [other residents] were shocked, confused and their jaws were just dropped,” he said. “I saw a few people hugging each other and crying. …”

When Araujo got off work, they drove to her parents’ house in the city of Center — about three hours away — to drop off Micah until June 14.

They were allowed back into the apartment on the following Tuesday for five minutes to grab their things.

“We grabbed what we thought we would need,” Cortez said. “Such as clothes, the baby’s diapers, his wipes and stuff like that. But it just wasn’t enough time.”

Araujo said they didn’t know it would be the only time they would be allowed back in their apartment. She also said they are still missing a lot of vital necessities, such as a baby-bathtub, a proper bottle washing station and most of their clothes. 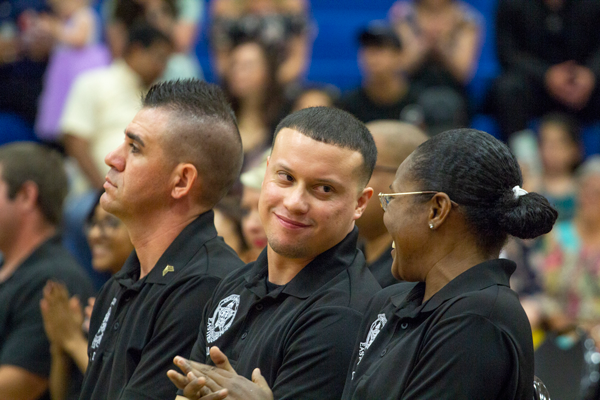 Cortez recently graduated on June 14 from the Eastfield Police Academy program. He plans to apply with the Dallas Police Department after passing his final tests. Photo by Skye Seipp/The Et Cetera

Fortunately, they grabbed Micah’s baby bouncer and some other essentials, she said.

Greystar — the property management company for Elan City Lights — put the family in a hotel room at the Hyatt Regency near Reunion Tower until June 15. Greystar also gave the family a $500 allowance and a $100 per diem until the following Friday, according to a written statement on the apartment’s Facebook page. Cortez said they want to try and save the money for a new apartment. They were also given a refund for their June rent and their security deposit.

“Unfortunately, the building has become totally unusable for residential purposes and you will not be able to reoccupy your apartment,” Elan City Lights wrote on a June 10 Facebook post.

They have renters insurance but remain unsure about what’s covered by their policy. Araujo said as of right now they have to pay for another hotel out of pocket and will hopefully be reimbursed later.

With no immediate family in the area to live with, they’re also looking for a new apartment.

Greystar sent out an email stating they would be hiring professional movers to put residents’ belongings in a storage area, but it could be until July 15 before people can retrieve their things.

Araujo said they went back to talk with the leasing agency later in the week to discuss their living options. They were set up with a company to help them locate a new apartment. But without any of their furniture, beds, cooking utensils and clothes, it would be an empty apartment.

Insurance told them that they could rent furniture and cooking utensils until they are able to get their belongings.

Cortez —who grew up in East Dallas and graduated from Woodrow Wilson High School — said they are trying to find another place in that same area but have had minor luck so far. 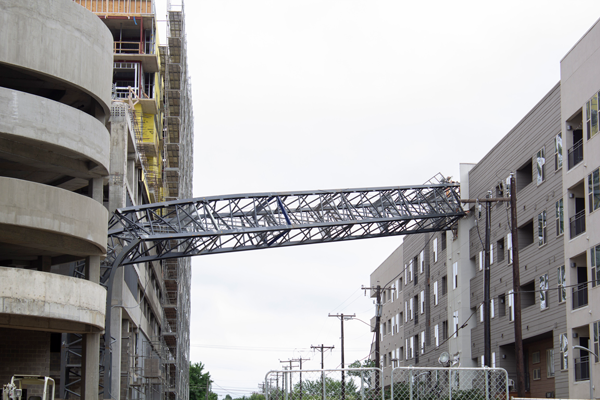 The crane is still embedded into the side of the apartment complex. There is no set date as to when it will be removed. Photo by Skye Seipp/The Et Cetera

On the Friday following the storm, Cortez graduated from the cadet police program at Eastfield after five months of training. He still has to take his exit exam this week to receive the Texas Commission of Law Enforcement license. He plans to apply with the Dallas Police Department if he passes.

“On top of everything he had his graduation and he is still having to study for his exit exam,” Araujo said. “So that’s been stressful on him too.”

It’s been more than one week since the crane collapsed. Cortez, Araujo and Micah are staying at a different Hyatt. Live Oak Street and the surrounding blocks of the apartment are barricaded off from the public, while guards monitor the area.

And lying across Cantegral Street, the crane is still embedded into the apartment complex.

‘Blessed and overwhelmed with joy’

People are coming together to give the family donations, thanks to the efforts of people like Terri Frias, administrative assistant for the Criminal Justice Training Center.

Campus employees were alerted of the situation in an email sent by Sharon Cook on June 13.

Frias said they have already received donations from people.

“It’s good to know … that it’s one big family, and we can pull together to help our people in need,” she said.

The email originally asked for diapers, baby formula, gift cards, money or other personal items. Micah is a size 2 in diapers and uses Similac Advance formula.

“We feel blessed and overwhelmed with joy by how people are helping us,” Cortez said.

A Wealth of Education: Mother, family use college to build stable future