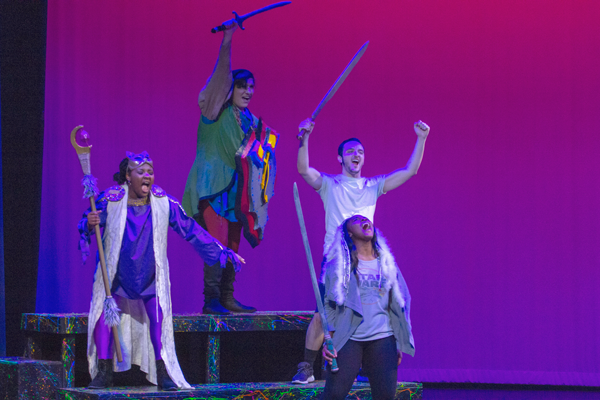 Theater students, faculty, staff and alumni who participated in this year’s productions gathered together to share memories, good laughs and praises for each other at Eastfield’s theater banquet on Wednesday May 8.

Theater director Dusty Reasons Thomas led the banquet where she handed out awards and announced the play lineup for 2019-2020.

In total, 22 awards and 12 actor nominee certificates were handed out.

“We really want to honor them and let them know how welcome they are,” Thomas said. “We’re very inclusive and everybody is welcome. You don’t have to be a theater major.”

Awards such as the best problem solver, the most helpful hand and best supporting actor were among some of the awards handed out this year.

Theater major Victor DeTerra, who was awarded the Edward Romero Award — named after an Eastfield alumnus who always managed to fill a roll, no matter how busy he was — said winning the award was surprising, but that he was honored.

“All the praise goes to Dusty,” DeTerra said. “If it wasn’t for her and her directing abilities it would have fallen apart.”

Next year’s programs were also announced at the end of the banquet.

The first performance and improvisation workshop will be on Oct. 10-11.

Following that will be six performances of “The Curious Incident of the Dog at the Night Time” on Nov. 14-15 and Nov. 21-22.

The last planned performance will be the children’s show “The Princess Test” starting on April 29 and lasting through May 1, 2020.