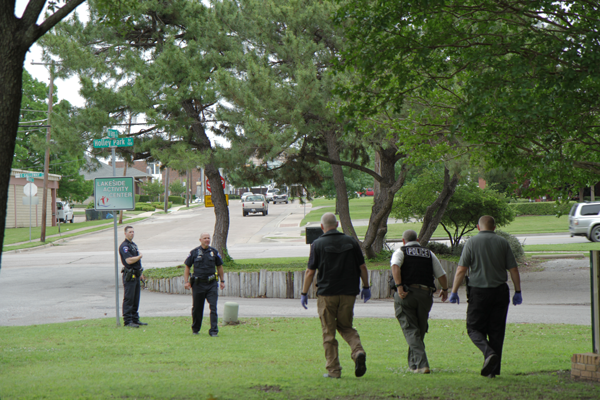 This story was updated on March 10 to add the names of the person arrested.

One person was hospitalized and two men have confessed to a shooting on March 9 near Mesquite High School, which left the school on lockdown for around an hour and a half.

Police have released the names of the two taken into custody as Mesquite resident, Treveon Sims-Hubbard, 17, and Seagoville resident Dwayne Lassai, 17.

The two were charged with a deadly conduct offense and a bail of $15,000 each, according to a police statement.

Police investigation revealed the shooting began after a physical altercation over a feud between multiple parties escalated, resulting in shots fired by Sims-Hubbard and Lassai.

The person in the hospital is in stable condition with a gunshot wound to the arm, according to a press release from Mesquite police Lt. Steven Biggs.

Police did not specify whether they are still searching for anyone who may have been involved and said the investigation is still ongoing.

The shooting happened around 2 p.m. at 120 West Main St. near the local Wells Fargo’s drive-thru, according to the release.

Police said two male students ran toward the high school following the shooting. The campus entered lockdown after surveillance cameras observed the pair entering the school at around 2:15 p.m. The lockdown lasted until 3:55 p.m.

It’s not clear from the latest police statement whether Sims-Hubbard and Lassai were the two who entered the school.

Multiple officers entered the school and located both subjects without incident and without any weapons, according to the release.

Aaron Perdue, a student at Mesquite High School, said that in the last 20 minutes of the lockdown the principal spoke over the intercom system and said there was no more danger.

Rene Chapa, a nearby resident, saw a group of the young men head south down Bodine Street toward West Gross Street and City Lake Park.

Students leave Mesquite High School after being in lockdown for about an hour and a half. Photo by David Silva/The Et Cetera