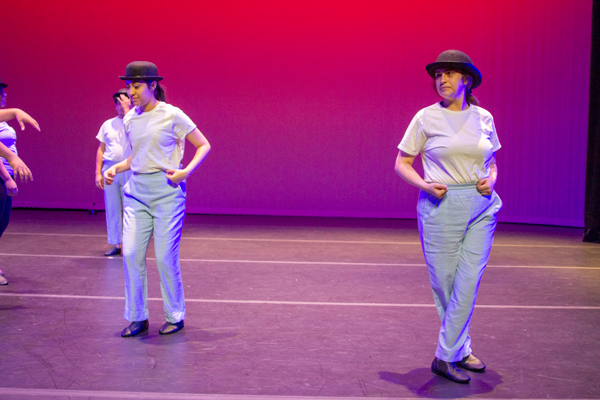 Arienne Cuevas practices for the upcoming Spring Dance Concert May 9-10 in the Performance Hall at Eastfield College on May 6. Photo by Yesenia Alvarado/The Et Cetera.

Congregated before a mirrored wall, several dancers pound to the ground, making bold jumps and leaps, powerful steps and precise turns as they learn their new post-modern routine.

It only takes just a few repetitions of each combination before their individual movements begin to converge into a unified performance.

Arienne Cuevas has a determined grin as she does what she’s loved for eight years — express herself through the art of dance.

After going through the routine a few times, the dance is finally put to music and Cuevas feels the driving beat surge inside of her through the vibrations as she dances passionately alongside her teammates.

The Eastfield Dance Company members finish their routine with gusto, each dramatically falling to the ground except for one dancer who is lifted in the air and spun into a circle.

Then they all turn to hear what their instructor, Danielle Georgiou, has to say about their first run-through. Cuevas pays close attention to what Georgiou is saying by glancing at Jordan Ward, her sign language interpreter.

“I don’t let my deafness stop me,” Cuevas said after practice. “I just keep going.” 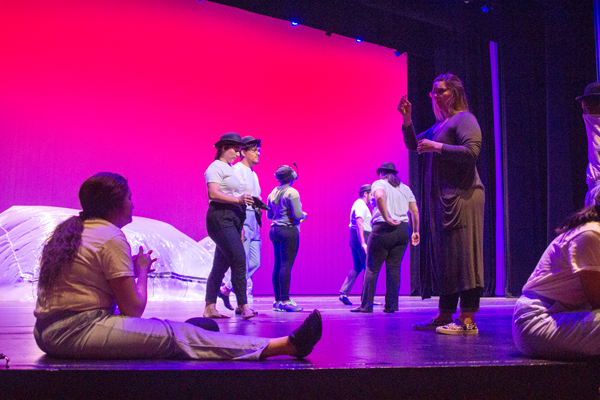 Arienne Cuevas speaks with her interpreter, Jordan Ward, during her dance rehearsal May 6 at Eastfield College. Photo by Yesenia Alvarado/ The Et Cetera

Cuevas began dancing in high school and joined Eastfield’s Dance Company two years ago. She has been preparing for the Spring Concert on May 9-10 at 7:30 p.m. in the Performance Hall. She will soon transfer to Texas Women’s University to finish her degree in education so she can teach kids with hearing loss.

When Cuevas was a toddler, she was taken to the doctor for her 2-year-old check-up. After performing a few tests, the doctor discovered that Cuevas was profoundly deaf.

“Probably the hardest day of my life, that day,” said Cuevas’ mother, Amanda Ladd. “I felt like I should have seen it.”

Ladd said there were no warning signs that her daughter might be hearing impaired before that day. She just thought she had a good, happy baby.

So Ladd signed up for some classes and learned sign language along with her daughter.

“At that time, she was around 3, so it was, you know, ‘apple’ ‘please’ and ‘thank you,’ ” Ladd said. “You’re trying to learn the language at the level that’s she going to communicate with. It’s like any other language. If you don’t use it you’re going to lose it.”

Cuevas’ family adapted and learned as well, though Ladd said in recent years they haven’t been using sign language as much as they did in Cuevas’s younger years. As an adult Cuevas can read lips more and the family uses texts to clarify communication issues.

Cuevas attended school in Mesquite all the way from elementary school through high school. Mesquite schools provide education for deaf students, allowing them to take the same classes as everyone else but by using sign language.

Aside from having a hearing impairment, Cuevas lives a normal life.

She loves her cocker spaniel, Nash, and traveling with her family. They’ve been to places such as Jamaica, Cozumel and Disney World, and they have plans to go to Colorado this summer.

As a teenager, Cuevas attended LIFE Deaf Youth Camp in Cedar Hill for a few years and now she volunteers for the camp every summer.

Cuevas also has a boyfriend, Juve Castro, whom she’s been dating for over a year now.

“He’s a huge impact in our lives because his parents are deaf, but he’s not,” Ladd said. “This makes communication much easier.

Cuevas’ love for dance began when she tried out for drill team at North Mesquite High School. She made junior varsity drill team and eventually the varsity team, the Pacesetters.

“Nobody else in the whole football stadium would know she was hearing impaired when she was out there in the field doing high kicks with the rest of her team,” Ladd said, adding that her daughter’s confidence began to soar.

Ladd, who was also in drill team when she was younger, said she cried at nearly every performance.

“People don’t judge me because they don’t know I’m deaf,” Cuevas said when describing what it’s like to perform in front of an audience. 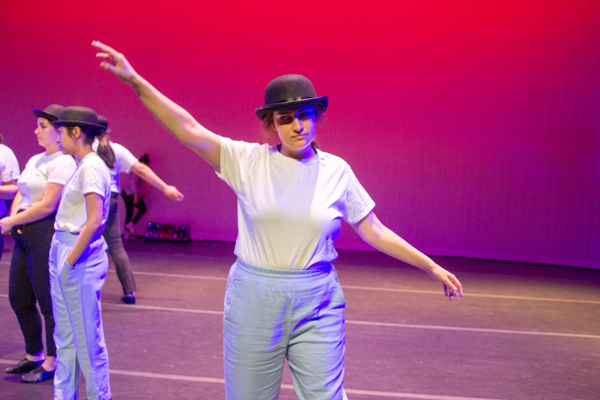 Arienne Cuevas rehearses May 6 at Eastfield College. She started dancing in high school. “I don’t let my deafness stop me. I just keep going,” she said.

Cuevas loved dance so much that she continued her career in college with the Eastfield Dance Company. She said jazz is her favorite style because she feels it is the most expressive.

“From the first day of class she expressed how much she loves dance and how it’s been such a big part of her life,” Georgiou said.

Georgiou said in the two years that Cuevas has been with the dance company, communication has improved to the point that an interpreter isn’t always needed at every practice or performance.

Fellow dancer Brittany McWhorter said she even learned the sign language alphabet to communicate with Cuevas.

“Not only is she beautiful externally, but she’s also very beautiful internally,” McWhorter said. “She lights up a room. When she’s here, everyone gets so excited. She just brings in extra light.”

Georgiou describes dance as “all access, all abilities.” Before working at Eastfield, she had experience teaching deaf and visually-impaired dancers at the University of Texas at Arlington.

“Dance is fundamentally about how you connect with people in the room, and so you start to develop this outer body awareness,” she said. “So you don’t need words to communicate at all, and you actually don’t even need your sight. It’s really about feeling the space.”