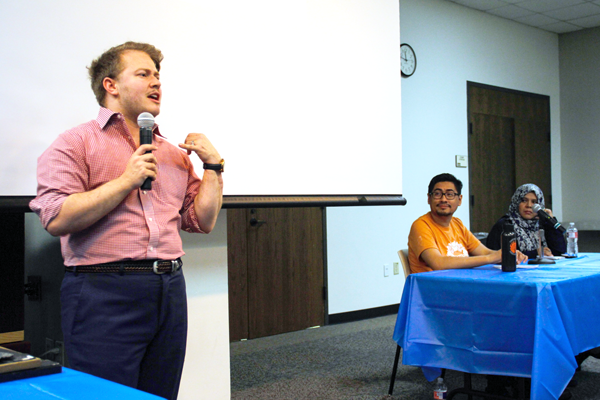 It’s one of the events the common book committee has organized this year, centered around the themes of “Maus,” a graphic novel about the Holocaust.

“With this book, we wanted it to be big,” librarian and committee member Megan Horlander said “It’s something we want to build on and expand and have more speakers every year, and be able to bring to our students.”

Three speakers shared personal stories related to human rights and how they took action as part of a panel discussion at the event.

Boucher and his daughter were both affected by the bill and went to the state capital to speak against it.

“To be told that I wasn’t allowed to use the restroom felt like I wasn’t even human,” he said.

Boucher spoke about being ostracized from his Catholic community, feeling discriminated against at work, marriage equality and the challenges of finding health insurance and healthcare. He said he has been turned away from 17 primary care providers in his hometown of Grand Prairie.

He said he tells them he’s on hormones, transgender and non-binary, and they turn him away. One provider suggested he go to an HIV clinic, another told him that they’re a family practice. 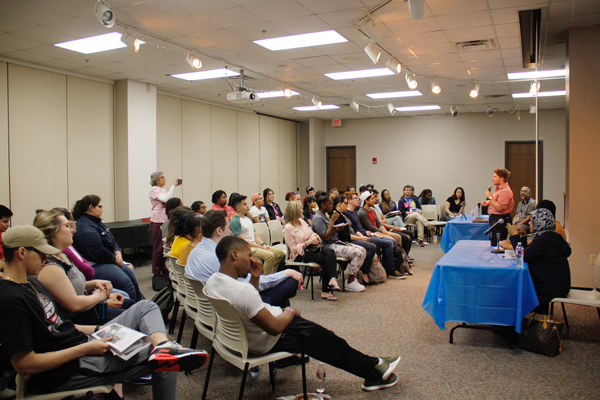 The second speaker, Nahela Morales, who moved to California from Mexico City when she was 4 years old, talked about her conversion to Islam from Catholicism.

“I always tell people that I am a better Catholic as a Muslim than when I was Catholic because I was just born into the faith,” she said.

Soon after she converted, she was excited to wear a headscarf and show the world that she was a Muslim, but then she was fired from her job. She believes her employer was uncomfortable with her new identity.

“It was very clear that they didn’t want me there,” she said. “So that’s really when my journey began and my activism, not only for myself but for those who came after me.”

Morales said her family in Mexico also wasn’t accepting of her faith, but her work has begun to speak for itself.

She is part of the Islamic Council of Social Justice and has gone to El Paso to advocate for migrant children separated from their families and translated for asylum seekers.

As an activist, Morales has worked alongside the third speaker, Julio Acosta.

Acosta moved to North Dallas with his family from Mexico when he was 2 years old. His father, who is from El Salvador, gained amnesty as a result of the Immigration Reform and Control Act of 1986. The amnesty granted Acosta and his mother citizenship.

He said that citizens can to take an ally role for immigrants, and it’s important that immigrants know their rights. He referenced resources for immigrants and for people who witness a U.S. Immigration and Customs Enforcement raid or police brutality.

Siscely Crayton, a science major, said she learned a lot about how she can help others and use her citizenship to be an ally.

“That was interesting because I have a lot of Hispanic friends, and their families, and I have a few who are not really citizens,” she said.

Acosta is part of DFWLeaders on Facebook, where people can send a message about what they’re interested in, and the group can find an organization for them.

“I believe that if I go to any mother or father in the world, they want shelter, they want some food, they want an education for their child, they want not to be killed or wronged,” he said. “That’s pretty much what all of us want.”

Acosta said in the last three years, he has learned more about the Black Lives Matter movement, women’s rights, LGBTQ movements and more.

“Not all of us have to do everything, but all of us can do something,” he said. “It’s enough to become educated and informed on the issues so that whenever we’re in public, or whenever we see something on social media that is not true or dehumanizing, we can be like ‘Actually the truth is XYZ.’ ”