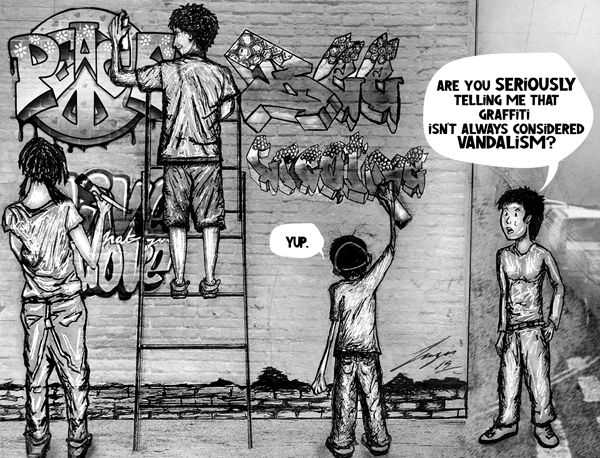 About a week ago, tags marked “Siren” started showing up in some men’s restrooms throughout campus and in a stairwell in the C building.

The tags, many of which have been removed or painted over, were done with a grease pen, which is a pain to remove.

The students of Eastfield College who pay for their tuition, books and additional learning materials deserve a campus that isn’t covered in unsolicited graffiti.

The custodial staff, who were quick in their response, shouldn’t have to make graffiti cleanup a regular part of their day.

And frankly, there are more constructive ways of expression than defacing your campus.

Tagging has had a rich history since the late 1960s when a Philadelphia high school kid tagged city walls to get attention, but graffiti art has its own foothold in Dallas.

Take the Sour Grapes graffiti crew, who started out in Oak Cliff in 2000. Now their work is displayed across Dallas and one of its founders is an adjunct art professor at the University of Texas at Arlington.

Another example would be to join volunteer projects around campus. One example would be the Coltan Call, a partnership with the Dallas Zoo and Keep Dallas Beautiful to collect and recycle cellphones. They’re seeking volunteers to help design and paint cellphone collection boxes for the recycling drive.

Why not express yourself while helping the environment? If you aren’t interested in saving the environment or joining an art group, this next suggestion might be good enough if you want to stay a casual tagger.

We are declaring a campuswide emergency to build the wall. The graffiti wall, where people can paint whatever they want on it, that is.

While we are against tagging as vandalism, why shouldn’t we encourage expression and bolster our artistic tendencies with one fell stroke? A free-to-use graffiti wall would be a great way to encourage art students (and taggers) to practice their craft and stay engaged on campus.

Tagger, if you’re tagging to simply break the rules or prove something, then congratulations, you’re such a rebel. But if you want to be noticed or take your art further, next time try something that doesn’t risk a fine or jail time.

We’d love to see what you’re capable of when you aren’t vandalizing our space.