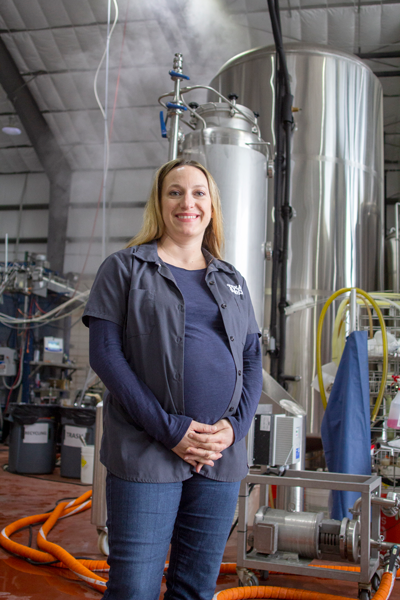 While it may seem like craft beer is a man’s world, many women are powerhouses in the industry.

Founder and CEO of Dallas’ Texas Ale Project Kat Thompson is one of them. Her brewery was the first to partner with Eastfield when the college launched its journeyman brewer certificate program.

For Women’s History Month, Thompson sat down with The Et Cetera’s Ashleigh Amburgey to discuss her position as one of the top-ranking women in the  Dallas-Fort Worth beer industry.

How did Texas Ale Project start as a company in 2014, and how have you grown since?

It was a little bit of an accident. I was getting my MBA at Cornell, and at the end of the school year at graduation, there was a homebrew competition.

Brent and I – he was my boyfriend at the time and now my husband – had never brewed anything in our lives before. But we were very passionate about food and wine, and we loved traveling to the wineries.

So I said, “Sure, why not? We’ll buy a kit and figure this out.” So, we started homebrewing with that competition, and Brent kind of turned to me and said, “I want to do this forever.”

So we dove into it, brewed another batch in our 700-square-foot apartment and did research on the market feasibility of us opening a brewery. Next thing I know, here we are.

Have you faced bias or discrimination as a female CEO?

When we got started. My husband is 6-foot-1 and has a beard, and then there’s short me next to him, and we were in conversations with people and telling them how we just opened a brewery. They would always look at him.

He is the one brewing the beer. That’s his side. His expertise is on the production, equipment [and] the beer. My background and what I add to the table is the business side: the numbers, the finance, the art as well, the can design and all that. So, we’re a good team, but there was that just immediate stigma.

What’s something we might not know about women in beer?

There are a lot of women in the brewing industry. There’s the Pink Boots Society that promotes female brewers and ownership of breweries as well.

Did you know that New Belgium is female-led? There are a few out there, including a couple in Texas, but not very many. We’re the largest in North Texas that is female-led.

In a world where craft beer is booming, what do you do to stand out?

It’s just as much about consistent, quality beer as it is about your brand and how you present that.

The colors – you know, having colorful cans, keeping something fresh, like from a packaging standpoint – are important.

Promoting it, the events that we do through the brewery, just bringing in the community in, is really important as well. We’re hosting a homebrew competition this year. We started Geeks Who Drink Trivia. We try to keep the brewery really active.

What do you think about the brewing program at Eastfield?

We participate in the program with Peter [Boettcher]. It’s a great program. I highly recommend it for anyone who is interested in getting into the brewing industry. It gives you a good level of classwork, but also hands-on work at a brewery to see what it’s really like. We’ll host interns as part of that program, so we’ve had quite a few folks come here and get that experience.

Since your family is in the beer business, what are family functions like?

We highly encourage other families to come here and experience it.

We have a 4-year-old son, and I’m about to have another. At first I was a little worried about having him running around the brewery and the safety of that and everything, but it’s actually better that he’s growing up with it because he learns to appreciate it.

He learns where the boundaries are, and it’s part of our culture rather than something to stay away from.

What was it like starting off so small and then growing to be such a large brewery?

I wish I had a time-lapse video of this. It was hard, and stressful.

Piloting beers one barrel at a time is definitely very different than this production scale. It is exciting.

You learn as you go, you make a lot of mistakes that cost lots of money. But if you don’t make those mistakes, then you don’t learn and improve, and don’t end up with quality beer.

What we did, as much as we could afford it, was hire experienced people that knew more about beer than we did.

We knew our strengths and tried to hire a team around us that could help us grow. Some of that I wish we could have done a lot faster from day one, but you’ve got to budget, and these things take time and money.

Starting out, the biggest thing was construction. We’re the first brewery in the city of Dallas to build from the ground up since Prohibition in the late 1800s, so the city did not know what hit them when we came to them with our plans.

We said “Hey, we want to build this building in downtown for a brewery.” You have to have boiler inspections. There were questions like, “Do we need sprinklers or not? And what’s the taproom for?” All kinds of stuff.

So working on all that on top of trying to develop a product line – test the beers, test recipes, test and install equipment, open a taproom, hire for the taproom, have a baby and get a new house in the same five or six months.

All of that hit at once.

Do you have plans to expand even more than this?

The good thing about building our own building from day one was now we have an awesome, state-of-the-art facility we built with a long-term vision in mind.

So we’re good here for 20,000 to 23,000 barrels. We just need the equipment, and we already have plans that show where the tanks are going to go for each of those phases.

How do you envision the future of women in beer? And do you have advice for women wanting to pursue a career in brewing?

I think it’s going to expand. Just start getting into it and get your hands dirty.

You have to prove yourself, just like a man starting out in the career who knows nothing about brewing but wants to be in it. Same thing goes for a woman.

You just kind of have to get in there and show that you can do it.