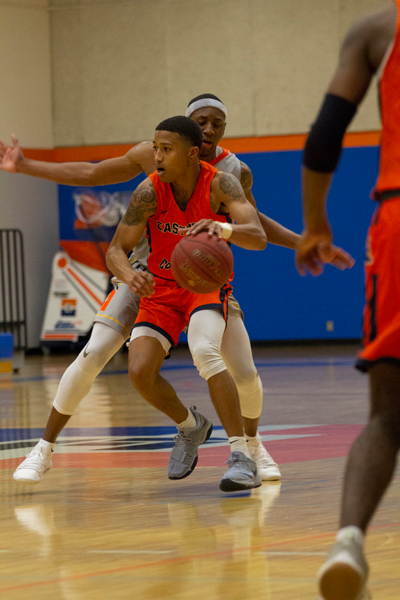 Eastfield’s goal of reaching the national tournament came down to the very last shot in the Region V basketball championship game, but it ended with a heart-crushing 82-80 loss to Richland.

The grueling defeat on Feb. 23 ended the Harvesters’ 25-8 season and sent the Thunderducks to the National Junior College Athletic Association Division III Tournament in Minnesota.

The loss was particularly difficult for point guard Rashaun Coleman, who had a record-setting season but missed the final layup as the buzzer was blaring.

“We’ve been talking about it all year, our road to Minnesota,” he said. “We had all the pieces for it, but we just fell short.”

The Harvesters, who were ranked as high as fourth in the national polls earlier in the season, led the nation in scoring with 100 points per game and finished in the top 10 in total rebounds per game (44.9), field goals per game (36.8) and free throws made per game (17.4).

Despite the disappointing ending, coach Anthony Fletcher said he does not consider the season a total loss.

“People really think highly of you when you’re nationally ranked,” he said. “Anytime in the coaching profession that you get over 20 wins, it’s a good season.”

Eastfield and Richland played a vigorous game of cat and mouse in the tournament finale, with neither side able to secure a comfortable lead.

The Harvesters were up 41-34 with three minutes left in the first half, but an extended run of Harvester fouls and missed shots allowed the Thunderducks to take a 42-41 advantage going into the half.

Richland pushed its lead to 59-47 with 13:30 left, but Eastfield refused to roll over as Coleman went on a nine-point scoring streak to make it 59-56 with 11 minutes left.

Both teams fought relentlessly, trading baskets to set up the dramatic finish. 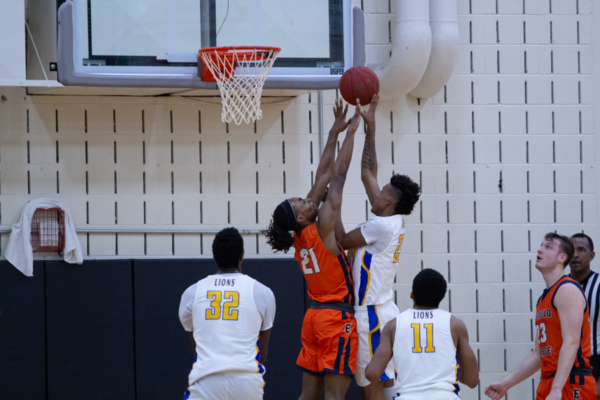 Guard Ta’Marcus Butler blocks a shot in the semifinals against the Mountain View Lions on Feb. 21. The Harvesters won 107-82. Photo by David Silva/The Et Cetera

“It hurts because we only have an eight-team (national) tournament,” Fletcher said. “It’s crazy if you think about it. Division II has 16. Division I has 32. At the end of the day this team could go to the national tournament and cause problems.”

Coleman, along with fellow sophomores Scott Garriga, Danny Salamah, Anthony McGee and Demauria Haywood were key players the past two years who plan to continue playing at four-year institutions.

While they fell short of a national title, Fletcher said the connection the players had with each other allowed them to have a successful season.

Coleman led the NJCAA Division III ranks in assists with 285 and shattered the Eastfield record for career assists with 447.

He ranked fifth in the nation in overall points with 719 and is now second on Eastfield’s career scoring list with 1,151 points.

“I feel like we had a very good season,” Coleman said. “Freshmen stepped up and the sophomores led the freshmen. My two years here have been two of the best years
I’ve ever had.”

One of the top freshmen this season was D’Angelo Smith, who said he is looking forward to making another run toward the national tournament next year.

“We’ve got a whole other year next year,” he said. “We’re gonna be faster, and we’re gonna do our thing next year.”