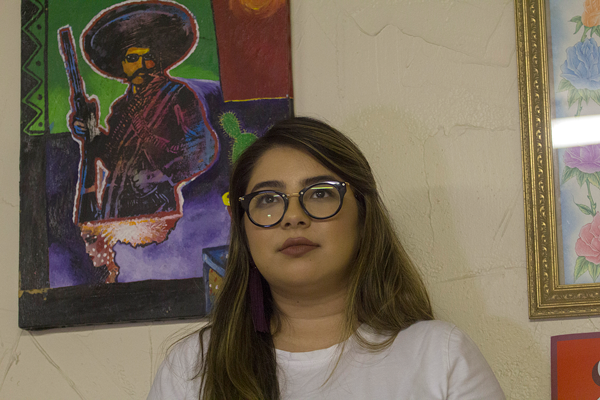 As Maria Yolisma Garcia maneuvers past the energized mass in front of Dallas City Hall, she finds herself in a familiar position.

The “March for Our Lives” T-shirts are unique, but everything else, from the concert of chants, to the flashing of news and cell phone cameras, to the sheer number of protesters and the diversity among them, is not a novelty.

Nevertheless, she’s eager as she moves closer to the makeshift stage ahead.

After finally getting a good view, Garcia pauses to join in with the restless crowd.

Garcia, a 2014 Eastfield graduate, formerly undocumented immigrant and current president of the North Texas Dream Team, has always been unapologetic. Her outspokenness on a variety of topics and her pride in her undocumented identity has brought her to many protests like this one.

Protestor is one of the many roles Garcia has served throughout her life. She’s heard titles like advocate, leader and Dreamer, as well as provoker and criminal.

But long before she ended up on the steps of City Hall with a fist in the air, Garcia served perhaps a more important role: her family’s translator.

Growing up in Old East Dallas, the Garcia family became accustomed to U.S. Immigration and Customs Enforcement and gang unit visits to her neighborhood. When the police would get close to their door, the Garcia family would turn off all lights inside the house to avoid any unwanted attention.

They watched through a window as their unlit living room filled with waves of flashing blue and red lights.

Her parents told her she didn’t have papeles, papers, but the young Garcia didn’t really understand what that was, so she didn’t worry about it.

Her parents, not wanting to further instill fear in their daughter, didn’t press the issue.

Then there was the trip to her hometown, Pánuco de Coronado, Mexico, at the age of 7.

Garcia found it odd that she had to memorize travel documentation from an ID that wasn’t hers, but she didn’t worry about it.

“I must have been going through life in this big bubble or something,” she said. “I guess [my parents] were afraid that I would let that define me and shut off from everything. They saw this bouncy little girl making friends with everybody. The last thing you want to tell someone is, ‘Hey, you need to hide into these shadows.’ ”

For a long time, Garcia was also the only person in her family who knew how to speak English. From drive-thrus and grocery stores to doctor’s appointments and teacher meetings, Garcia was the main communicator for her parents.

“You’re learning these big words for the first time and learning how to navigate the institutions with your parents at the same time,” she said. 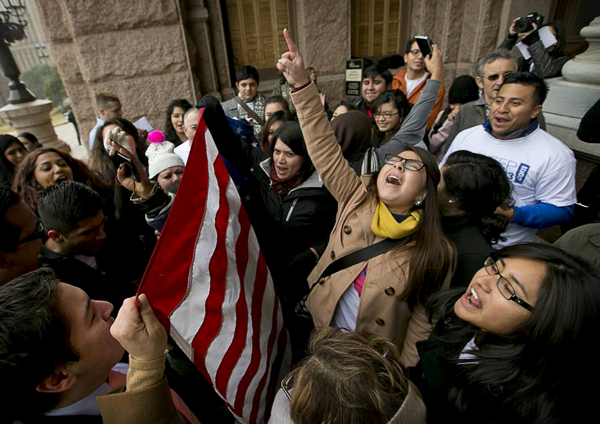 As Garcia started to catch a hint of her and her family’s situation, she was confronted with the possible exposure of her legal status at school.

“In middle school, there was a rumor that I wasn’t from here,” she recalled. “I chuckled at it and I owned it. … ‘I’m from Durango and I’m proud of it and I’m not ashamed.’ ”

Garcia intended to not only present herself transparently, but to also shatter her classmates’ expectations of Mexican immigrations.

“In their minds, someone who’s undocumented was probably someone who was mowing their lawn or cleaning their house,” she said. “But no, it’s people like me that you sit with in class and have show choir with.”

Driving against the wall

The barriers she faced as an undocumented student came hurdling in, seemingly all at once. She was doing everything she was told to do: taking AP classes, studying for the SAT and preparing for college.

“But I can’t drive. I can’t get a job. I’m not valid for these scholarships or FAFSA,” she said. “I’ve gotta navigate my life with this wall, driving up against it but I can’t get through it.”

Garcia couldn’t help but feel resentful about her situation.

“I felt a lot of anger,” she said. “I asked my mom why she left if she knew life was going to be difficult for us. Why didn’t she just stay? I was also angry at the fact that I would see people who I knew were citizens not do anything with their lives. They weren’t engaged in anything. They weren’t getting jobs. They’re not getting their driver’s licenses, they’re just sitting there.”

Despite her internal struggles, she began to realize her confidence had an effect on her classmates.

“I had a lot of people come to me,” she said. “Opening up to me about their legal status, too.”

She saw that a lot of her counselors weren’t aware of the choices that Garcia and her classmates had to make post-graduation.

“They couldn’t really help us out,” she said. “I went and scoured different resources and got involved in LULAC.”

Garcia joined the League of United Latin American Citizens, the largest Hispanic-serving organization in the country, during her freshman year at Woodrow Wilson High School.

It was with LULAC that she began to learn more about the resources available and began to vocalize the disadvantages Latinos were facing at her high school.

By her junior year, Garcia and her friend Liz Magallanes brought the Unity Project to Woodrow Wilson.

Garcia and Magallanes provided translators at PTA meetings, created flyers in Spanish and brought groups to their high school to talk to the Latino community.

“She wants to see other people succeed and wants to find concrete ways to do that,” Magallanes said. “She’s all about action. That was really powerful to see.”

As the DREAM Act was before Congress, Garcia came in contact with the relatively new North Texas Dream Team. The group was fighting in favor of the law, which would have granted legal status to some immigrants who had entered the country illegally.

She met Latino community leaders, many of whom were undocumented. She noticed that despite their legal status, they were vocal and vigilant in their cause.

“I saw a presentation that they did, and I saw these fearless students,” she said. “They were either in college or just graduating high school and they were out here really advocating. Gaining a little bit of insight from them was really powerful.”

Garcia saw a beacon of hope with the DREAM Act, an opportunity to work, advance academically, obtain a driver’s license, pay taxes and most importantly, no longer live in constant fear of deportation. 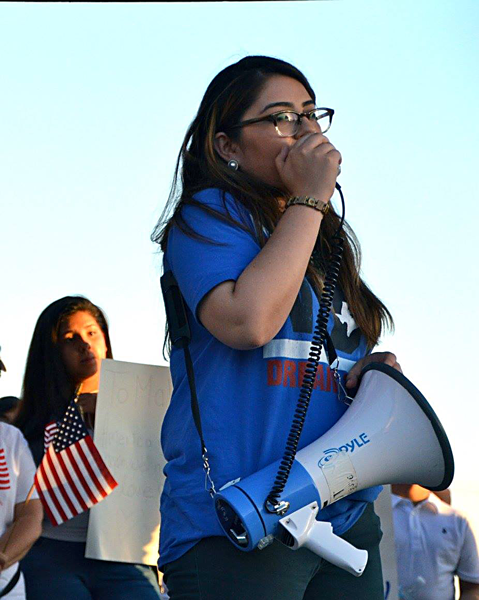 “I didn’t really sleep on the fact that there was so much to be done with not enough voices,” she said. “My initial thought was, if a single voice like mine could uplift so many others then I would hope that they join me too.”

Then, in 2010, the DREAM Act failed to pass, discouraging Garcia and many of her peers.

”My heart just sank,” she said

After the initial sting, the helplessness of defeat was something Garcia refused to accept. Her activism continued, and she and her peers continued to push for legislation for immigrants.

“At first, I felt very defeated,” she said. “But then I remembered that I come from a community that’s very resilient. Regardless of the obstacles that have come our way, somehow we always keep pushing back.”

Then, Garcia’s family got a unique opportunity.

Garcia’s father had a permanent resident application pending since 1994, one he submitted through his brother.

Months after the defeat of the DREAM Act, his application was accepted and the application allowed Garcia and her mother to obtain their green cards as well.

Garcia received her permanent residency in 2011.

Garcia couldn’t sit on her own personal victory. As she began to attend Eastfield, she balanced schoolwork, extracurricular activities and her role as the immigration chair of the now-expanding North Texas Dream Team.

Her involvement at Eastfield with clubs like the Communication Club made her the Student Leader of the Year in 2014, and her role with the North Texas Dream Team put her at the forefront for aiding Hispanic communities, specifically helping eligible young people apply for the Deferred Action for Childhood Arrivals program.

“She’s an excellent communicator and a hard worker,” said speech professor Mary Forrest, the Communication Club’s adviser. “She’s a very authentic leader, someone you can trust. We need people like her.”

Garcia looked to return the assistance she received when she was in high school and hoped to inspire young Latinos like she was inspired.

“It’s the stories that I hear,” she said. “People who come back from one of our workshops and say ‘I have my license now.’ ‘I’m working.’ ‘I’m a teacher at DISD.’ ‘I’m a nurse at Parkland Hospital.’ It’s a [result] of NTDT being a vehicle of making their dreams come true. It’s something that drives me continuously. If it were not for our work, then these young individuals would still be in a limbo.”

Following her time at Eastfield, Garcia graduated from the University of Texas at Arlington with a public relations degree.

She currently works at Dieste Inc., a multicultural marketing firm.In March 2018, Garcia was chosen as the president of the North Texas Dream Team.

Bringing her experience, motivation and energy to her role, Garcia hopes to expand the organization and continue the fight for immigration issues.

“For me to be in a space of higher education, I know I have resources readily accessible,” she said. “I wanted to make sure I was opening the door for others too. What does it serve me if I’m going through these doors but the rest of my community isn’t. It’s very important for me to reach back and bring others with me.”