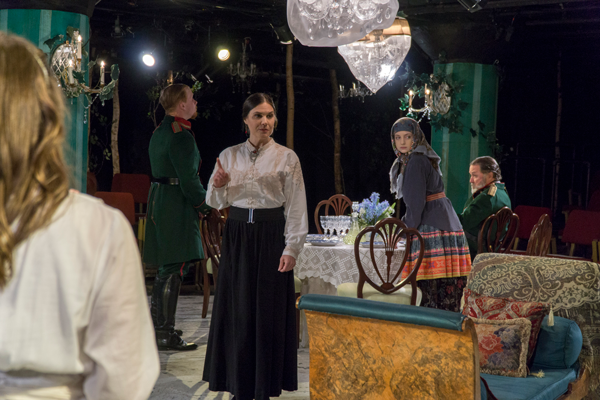 The Undermain Theatre is one of Deep Ellum’s best-kept secrets. The black box styled theater is tucked away in the basement of the historic 3200 Main Street building. The location makes it quite literally a hidden gem that presents a great mix of new age and classical theater.

Through the main glass doors, reinforced with steel, is a lobby of an empty loft apartment complex. At the end of the lobby is an oversized elevator and to the right, stairs with red brick walls and concrete flooring.

Walking from the gravel parking lot to the basement level of the Chicago-style building is the perfect balance of orientation and mystery.

There’s a comfy looking black leather couch against a blue wall to the right of the concessions where a man sits, a $5 Starnold in hand.

On the side of the room opposite the couch, an intimate couple is seated at a table in the corner drinking wine, and others have used the remaining table that circles a large gray pillar on the right side of the room to set their drinks down while they stand and chat with one another.

The plays that Undermain performs in its home theater as well as in New York and Europe are thought-provoking and substantial masterpieces. They produce new and experimental plays such as their adaptation of Neil Young’s “Greendale” and the world premiere of Len Jenkin’s “Port Twilight.”

The audience, with drinks in hand, walks around the corner and down a small, dimly lit hallway where large doors open up to the performance area. On the way to their seats, the audience is surrounded by thin limbs of trees illuminated by firefly lights.

Large concrete pillars in the audience have been painted green and wrapped in leafy vines. Bright crystal chandeliers have been wrapped in a fog of white veil and hang over the stage as well as the green pillars where ivy hang from sparkly crystals.

The historic Frank Lloyd Wright chairs, originally installed in the Kalita Humphreys Theater in 1959, add to the atmosphere. The carefully decorated set and round center stage bring the actors into the same space as the audience, creating an interactive and high-energy performance.

The evening’s brilliant performance was of Anton Chekhov’s “Three Sisters.” The trees, vines and benches give the impression that the audience was on the terrace with the characters, wandering through the dream like forest of birches and looking into the home of the sisters.