The success of “Black Panther”  has become a cultural watermark for African-American heritage. Prior to the film’s release date, significant press was attributed to the predominate number of the film’s black cast members, black director Ryan Coogler and setting in a technologically advanced African nation called Wakanda.

Never before in industry history has a film with a predominately black cast had a $200 million dollar budget.

Austin Action Film Festival founder Chilimbwe Washington said the film has an impact on black audiences that others may not  completely understand.

“I saw two very different screenings,” he said. “One was a mixed audience and the other was a black theater. At the black screening we caught every single nuance that the other one didn’t, why? Because the filmmakers were talking to us. It was written by black folk. It was directed by black folk. You can tell.”

Before the Black Lives Matter movement, the story of the police shooting of Oscar Grant was told through Coogler’s first film “Fruitvale Station.”

Grant’s death sparked outrage and protest in the Bay Area where Coogler had grown up. These experiences provided a substantial foundation for Coogler’s direction for “Black Panther.”

The references to the Black Panther Party within the film are plentiful, starting with the film’s initial poster that parallels Huey Newton’s famous “chair” portrait. 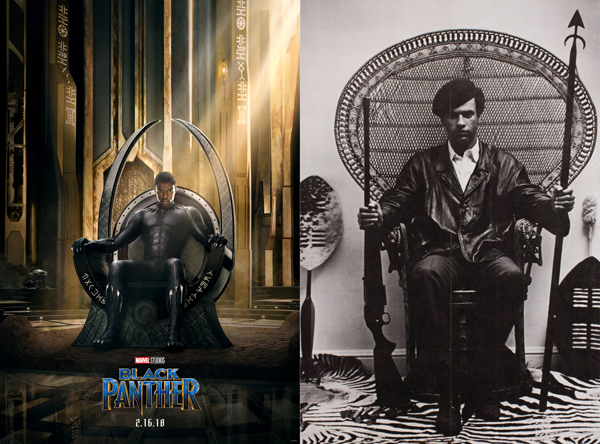 During the opening of the film, N’Jobu (Sterling K. Brown), utilizes the ideas of The Black Panther Party as a symbol of pride and strength for the African-American community who were raised in the ‘60s and ‘70s.

From the inception, the police were at odds with the group resulting in a shoot-out with the Oakland police in 1967, where founder Newton allegedly shot and killed a police officer.

The political group supported the community with many social assistance programs such as health care, food pantries and student breakfast assistance, yet was also known for their “radical” ideals of black liberation.

N’Jobu’s character is similarly “radicalized,” making one of the film’s central themes black liberation and the responsibility that Wakanda has in a world where black people have been historically oppressed.

The achievements of the film goes well beyond the box office to the heart of Africa in the setting of Wakanda.

The advanced civilization is built on the technology of the fictional mineral Vibranium which holds a unique place in the Marvel Cinematic Universe. Not only is the resource in Wakanda a powerful one for the nation, but it’s also a highly important mineral in the MCU, putting the characters of the story in an important place for films to come.

The film also makes a strong statement for women of color, something that’s not typical for films of this stature.

“There is nothing like the roles women portray in this film, everything “Wonder Woman” showed except with more clothes,” said Faust.

The strength female characters hold are near equivalent roles in the film’s storyline. They stand tall along with their male counterparts.

“I really liked the idea of the women in their culture,” Business major  Christian Gaston said. “It had a lot to say about how traditional women are the ones in movies who need to be saved. And I like that now they are showed as heroines.”

When interviewed about “Black Panther,” Coogler said that he viewed the Black Panther as a Bond film, which becomes evident with Shuri who is portrayed by Letitia Wright.

Shuri fills the technological needs T’Challa has as Black Panther’s very own “Q.”

“She was a scientist and she creates, that was really something I was proud of, to see a character that you don’t always see in films,” computer graphics major Angelica Fields said.

Bongani Mlambo, a Los Angeles-based filmmaker who was born in Zimbabwe, said “Black Panther” shows an interest in the black community that wasn’t present before the #OscarsSoWhite movement.

‘“Black Panther’s success is a form of validation that stories about and from the black community are as good as any other Hollywood story”, he said.

Although other films have showcased black superheroes, even within the Marvel universe (“Blade” 1998), none have had the significance or impact like Coogler’s “Black Panther.”

The film’s success will likely not be lost on Hollywood executives.