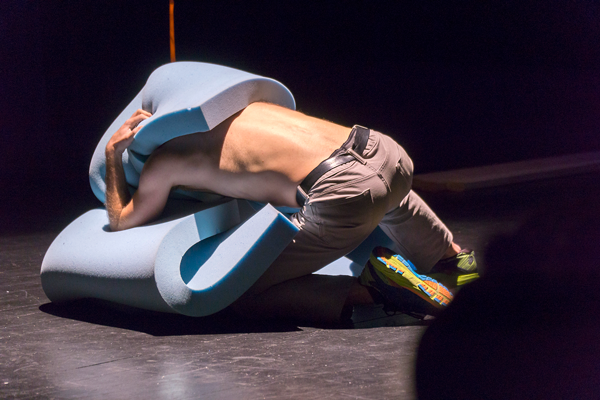 Brandon Gonzalez participates in a live performance for the “Body Texture” exhibit on Oct. 20 in the Performance Hall. Photo by Yesenia Alvarado

The human body is always in motion — whether the movements are as simple as an absentminded twitch of a finger or as complex as a ballet twirl. What if we are forced to recognize the innumerous simple movements over the complex ones?

These are the questions raised by Brandon Gonzalez’s “Body Textures” exhibit.

Gonzalez, who obtained his Master of Fine Arts from the University of California at Davis, has always been fascinated with the human form.

He studied sculpture for his undergraduate degree, which was when he decided to start making art about the human body becoming the material, rather than using art tools to recreate it.

The art piece Gonzalez staged Oct. 20 at Eastfield started off with nine dance students walking slowly under dark purple stage lights toward the audience, who shared their stage. The dancers’ movements then became even more simple: a lift of an arm, a half-squat.

The dancers were not synchronized in their slow movements, but this only added to the hypnotizing effect the piece had on the viewer. The dark-pop music playing in the background blended with the dark lights and shadows of the movement.

The audience joined in a trance with the dancers, which in turn made the performance feel deeply
personal to both parties.

“The performers can feel you,” the introductory pamphlet said. “Everything from the changing lights to the hanging curtains … from your breath to the sounds playing from the speakers is a part of the event.”

The message of “Body Textures relied on mutual intimacy and the implications and outcome of it.

“The simple act of walking slow all of a sudden disrupts our normal pattern and way of being,” Gonzalez said. “That simple thing can be a political act in a way where you’re challenging notions of a how a body is supposed to be used.”

While this notion seems small, it can cause a big disruption.

The end of the piece showcased Gonzalez, alongside a student dancer, holding a large piece of wrinkled plastic fabric and walking back and forth while occasionally twirling the fabric.

Then an image was cast on the plastic, which in turn reflected the image of what looked like a very up-close shot of a part of a muscle.

“It’s very revealing to see what’s inside you,” said dance professor Danielle Georgiou, who worked the projector and was also the stage manager of “Body Textures.”

Fascia, which was the type of muscle showed by the projector, exists in every human being.

This muscle, like the way the audience sat on the stage instead of below it, brought mutual unity between strangers.

“I think that intimacy is somehow connected to an interest in an empathy with each other,” Gonzalez said. “And I think that the performance offers that opportunity for an intense encounter.”

Videos showing Gonzalez’s work are on display in the Performance Hall lobby until Nov. 30.