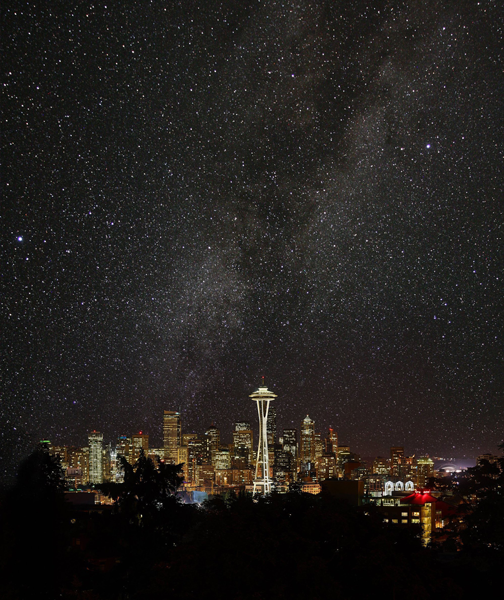 In this composite photograph, the disappearing night sky is depicted. If it were clear and the lights in Seattle were turned off, here’s what we could see above. Photo by Benjamin Benschneider/Seattle Times/MCT

The same stars that have existed for billions of years are diminishing visually due to light pollution, said night sky advocate Gary Carter.

Light pollution, which is the excessive and inappropriate use of light, is a phenomenon that affects every living organism on the planet but is not well known.

Carter, a member of the Texas Astronomical Society of Dallas, said light pollution’s effects are mostly harmful. He spoke Oct. 5 at STEMinar sponsored by the Science, Technology, Engineering & Math Division.

“How many of you have seen this?” Carter said after displaying a picture of a landscape in which stars are bright and visible. The audience stayed silent.

“It’s estimated that 90 percent of humanity, at least in the United States, especially if you’re east of Dallas, have never seen this,” he said. “And why? Because we’re too well lit.”

The International Dark-Sky Association estimates that least 30 percent of all outdoor lighting in the U.S. alone is wasted. This wasted light adds up to $3.3 billion and the release of 21 million tons of carbon dioxide per year.

Carter stressed that light pollution not only feeds into climate change, it ruins ecosystems.

“A good example of this is the sea turtle,” Carter said.

Sea turtles hatch at night on the beach but find their way to the sea by searching for the horizon the morning after. The growing amount of artificial light can lead them astray. Millions of new sea turtles die this way every year.

Although the night sky is now taken for granted by the general public, it once was depended on for guidance. The stars led to huge discoveries that advanced mankind.

Carter called for a community and individual effort in combating light pollution.

“How can you take action? Well, community projects,” Carter said. “Work with your homeowner’s association. Start with yourself. Fix your house up. Talk to your neighbors. STEM activities, like we’re doing.”

“We could try holding some of those things at Eastfield like have food, tents and what not to make it a big deal, but also educate the people that are going,” Mejia said. “Like the Solar Eclipse event on the first day of school. It brought a lot of people who don’t know much about science.”

“I would like to see the stars at night again,” Zapata said. “It’s something that people know about, but don’t really care about it because the public feels it’s not a huge problem. But I say it’s worth investing. It’s a domino effect that expands the damage as time progresses.”

“We need each other to progress into a better life not just for ourselves, but the future life of the planet,” business accounting major Jon-Michael Turner said.