Soccer kicks off with two wins, one loss 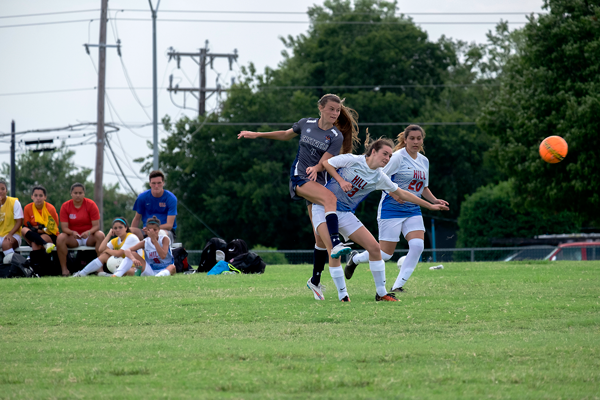 The Eastfield women’s soccer team kicked off the season by winning two of its first three games.

Eastfield scored twice in quick succession early in the second half and later added two more goals to pull away for a season-opening road win on Aug. 22.

“We had five goals from five different goal scorers,” Eastfield coach Dustin Stein said. “It’s huge because a big problem for us last year was being able to find the back of the net.”

Sophomore attacking midfielder Emily Juarez assisted on Hernandez’s and Lomeli’s strikes, and she also created other scoring opportunities with two shots on goal.

The Harvesters fell behind 1-0 in their home opener on Aug. 25 after Renaisha Mitchell’s strike in the 21st minute.

However, in the 58th minute, Carlock set up Dunsworth for the equalizer.

The score stayed tied until the closing minutes, with Hill’s Jerci Lopez scoring the game winner with just four minutes to go.

Stein said the team made defensive errors on the goals conceded, and they must learn from those mistakes and prevent them in the future.

“That was something we were able to address in the film session,” he said. “Hopefully, we don’t make those mistakes again.”

Freshman defender Alexis Villa set up Dunsworth in the 35th minute for her third goal of the season, giving the Harvesters a first-half lead that they would never relinquish in an Aug. 29 shutout.Stein praised how his players reacted to the early substitutions he made, quickly turning the game in their favor.

“Some of our subs gave us some really good minutes and altered the game,” he said. “These bench [are] players getting in and making a case that they should be in the starting 11. That’s what drives the starters as well.”

Eastfield scored two quick goals just after the 70-minute mark in the second half.

Freshman midfielder Alyssa Guzman took part in both goals, assisting Lomeli for the second before being immediately being set up by Carlock for the third.

Goalkeeper Gabriela Roa came up big for Eastfield, making eight key saves and preventing Cisco from getting onto the scoreboard.

She admitted making some costly mistakes during the previous game, but vowed to continue to improve.

“I know I can do better,” Roa said. “I learned from my mistakes against Hill.”

Dunsworth is proving her worth to the team, having scored in each game she’s played, but she knows she needs to produce more for the team to succeed.

“I feel like I can keep doing a lot better and finish more opportunities,” she said. “[I want to improve] my crosses so my teammates can finish them.”

Stein said he’s glad that the team’s depth is being challenged, as it gives each player the experience needed to compete at a higher level and gets them ready for the games that matter later in the season.

“The biggest thing we need to do is continue to define the roles and understand our jobs, and if the players can focus on what their role is,” he said. “As long as everyone is doing their role, we’ll be OK.”