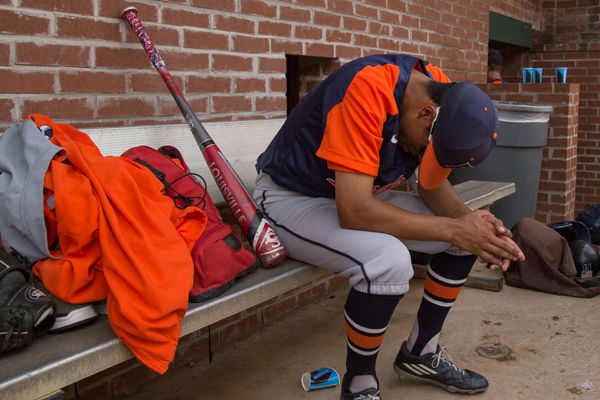 Joseph Sanchez cries in the Harvester dugout after a 10-6 loss against the Brookhaven Bears ended the team’s season. This season was Sanchez’s second and final year with Eastfield. Photo by James Hartley/The Et Cetera

For the second year in a row, The Eastfield Harvesters suffered double elimination after losses to the Tyler Junior College Apaches and the Brookhaven Bears.

The Bears scored 10 runs on only 4 hits. The rest of their on-base time came from 11 walks and two hit batters.

The story was similar to last year for the Harvesters: They won their first two games, one against the Bears, and fell in the same order: first to the Apaches and second to the Bears.

The Bears, who last year would go on to lose to the Apaches, will be in the same position this year. They will have to beat the Apaches twice to win the regional title. One victory would be an upset.

Two years ago, the Harvesters were the runner-up to the regional championship, losing both of their allotted games to the Apaches.

This year, the loss to the Bears ended the Harvesters season Saturday.

Isaac Dominguez slides into first during Game 7 of the National Junior College Athletics Association. The Harvesters were pounded by the Apaches 9-2. Photo by Lesley Reyes/The Et Cetera

The Harvesters pitching staff had a hard time finding the strike zone, giving up 11 walks and 2 HBP’s, the accumulation of walks led to most of the offensive production by Brookhaven who had 10 runs on only 4 hits.

“You give a team that many opportunities, and they’re gonna take advantage of it sooner or later” Coach Martin said. “They were just not hitting the strike zone, maybe just being a little too fine with their pitches, we’re trying to get them to attack the hitters and make them hit, and make them swing the bat”.

Graves said the game could have been different if the pitching was tighter.

“We probably could have thrown the ball better,” said Assistant Coach Travis Graves. “We missed out on opportunities to score with runners in scoring position.”

The Harvester offense put up 6 runs on 11 hits. They had a chance to tie the game in the ninth with Jacob Perry at the plate with the bases loaded and two outs. Instead, Perry flew out to left field to end the game.

The Harvesters came out victorious in their first NCJAA Region 5 Tournament bout against the Cedar Valley Suns 10 to 9. The Harvesters had a 10 to 5 lead heading into the ninth inning when Cedar Valley scored 4 runs on three hits and two walks, allowing Eastfield to escape the inning with a one run win.

The offense for the Harvesters got off to a hot start scoring six runs on six hits in the first inning. The offense was led by the clutch hitting of Gabe Guzman who went 3-for-4 with a triple and an RBI.

Starting pitcher Ryan Boaz got the win pitching six and two thirds innings, giving up five earned runs. This was Boaz’s second win of the season.

“Whenever the offense puts up 10 runs its easy”, said Boaz. “I think I did good enough for us to get the win”

Isaac Dominguez tags up on first to get a runner out in the game against the Tyler Junior College Apaches. Photo by Lesley Reyes/The Et Cetera

The Harvesters came out victorious against the Brookhaven Bears in the second matchup in the tournament by the score of 6-4.

Five of the six Harvester runs were scored in the fourth inning. Jordan Parker and Jake Milton hit RBI singles in the fourth giving the Harvesters a lead that they would never relinquish.

Starting Pitcher Paul Bowman pitched 6 2/3 innings giving up 4 runs, all in the seventh inning, while walking 5 and striking out 3.

In the Harvesters third game of the tournament, they suffered their first loss to the Apaches by a score of 9-2.

The pitching staff couldn’t contain the Apaches, giving up nine 9 on 15 hits. Michael “Big Mike” Tamez pitched 5 2/3 innings giving up 5 runs, Tamez has a 5.21 ERA with a 5-4 record. Ben Simpson gave up four runs in 3 1/3 innings of work, Simpson has a 7.39 ERA and a record of 4-1. In two different instances the Apaches had bases loaded against Harvester pitching that struggled to get outs.

Most of the offensive performance was characterized by “out at first,” with their primary means of getting out being the ‘groundout’. Racking up just 2 runs on 6 hits, the Harvester batters seemed to hit the ball right were the defense was. 14 of the harvester outs came via the groundout.

The Harvesters finish their season with a 27-26 record, 17-15 in conference play. 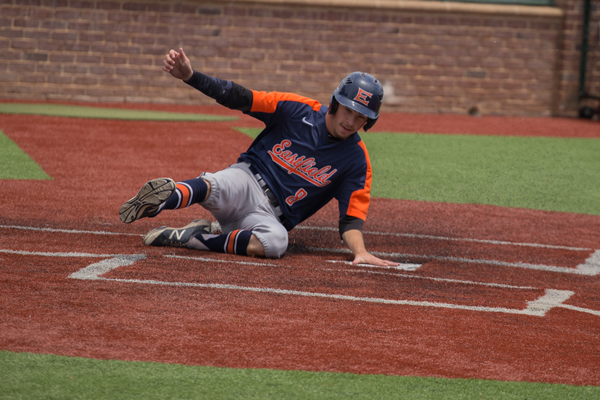 Jacob Perry slides over home plate to secure the first run for the Harvesters in their May 20 game against the Brookhaven Bears. The Harvesters would lose that game 10-6. Photo by James Hartley/The Et Cetera

Despite the team’s record, Martin said they exceeded many people’s expectations in the tournament, but the team expected more out of themselves

Among the players departing the team there were hugs and crying immediately after the game. Players who are leaving the team include Skylar Black, Joseph Sanchez, Paul Bowman and Gabe Gonzalez.

“That’s the worst thing about junior college sports: you get close to these kids and in two years they’re gone.” Graves said “I get a little sad. Coach Martin and I both get a little sad. You see these guys and they’re crying and hugging each other. … You’ve got guys who are here for two years, and they’re grinding and getting after it. I don’t think they realize how big of a moment it is until it’s over”

—James Hartley contributed to this report 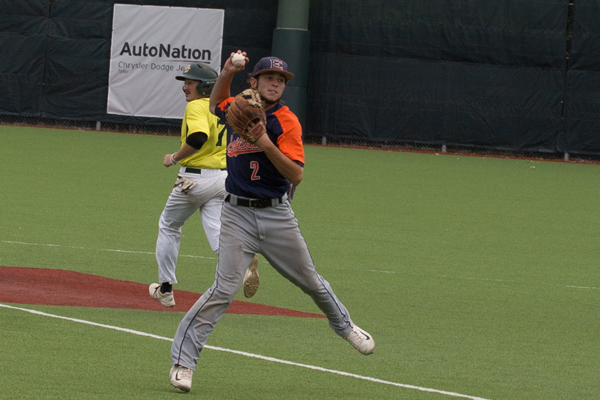 Logan Montoya, Harvesters second baseman, tries to tag a runner and throws the ball to first for an attempted double play. Umpires said Montoya’s glove didn’t make contact with the runner. Harvesters coaches disputed the call, but the call was unchanged, making the only out at first base. Photo by James Hartley/The Et Cetera