Mrs. Sabrina Daldry, portrayed by education major Albamar Seguinot, lies on a table, knees apart, while a doctor holds a large electric contraption between her legs. Soon, she begins moaning and writhing as she experiences an orgasm for the first time. 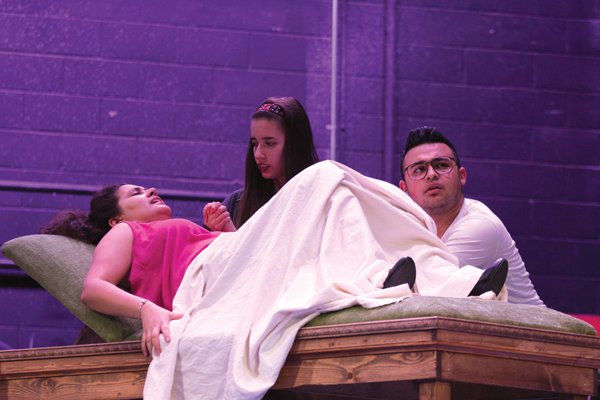 Theater major Vincent Perez, who plays Dr. Givings, also did not expect the play to be so direct.

“In the Next Room” takes places in the 1880s, when domestic electric power was in its infancy.

“It was a way to treat women who were ‘hysteric,’ ” stage manager and film major Iris Hernandez said. “[Men] didn’t know that [women] needed to be loved by their husbands. Back then, women were supposed to keep the house, have kids and keep their husbands happy.”

Mrs. Daldry suffers from hysteria, and is the first patient to be treated in the play.

“She was lacking love and tenderness and the caring part of marriage,” Seguinot said.

The play explores themes of marriage, such as what makes a good wife and how a marriage can fall apart. 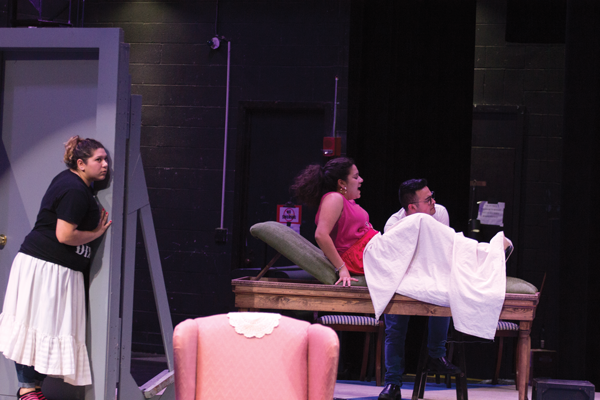 Seguinot believes that her character’s sexual discoveries and explorations are still relevant today.

“Women do have orgasms, and we have the liberty and the right to stimulate ourselves,” Seguinot said.

This is Seguinot’s first venture into theater. Despite the obvious sexual nature of the production, she is not embarrassed by her role.

Hernandez said that although “In the Next Room” can be a little uncomfortable for the audience, it is not graphic.

Michael Morris Jr., a film major who plays Mr. Stephen Daldry, finds some aspects of the play uncomfortable due to his sexual orientation.

“I consider myself asexual,” Morris said. “The idea of sex or orgasms or anything related to that usually makes me uncomfortable. The very first read through, I was like, ‘Why did I sign up for this?’ But I’ve gotten into it.”

Perez hopes that people will see past the lighter themes and understand the larger ones: marriage, feminism and sexuality.

Seguinot agrees that there is more to the play than shock value.

“Keep an open mind,” she said. “There’s more to it. Pay attention to what’s really going on and enjoy it.”