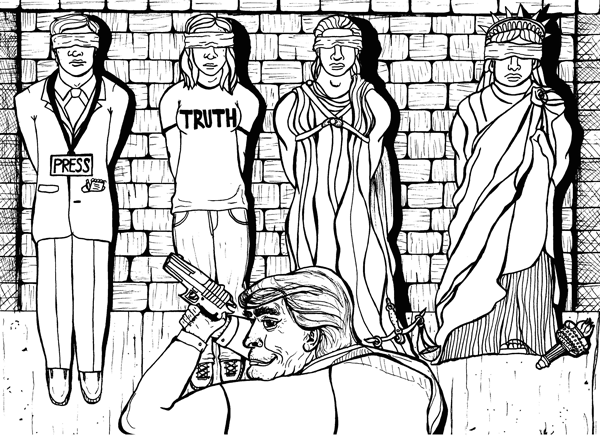 Less than a week after President Donald Trump placed his hand on the Bible and swore to honor and uphold the United States Constitution, he shook the country with more than a dozen executive orders of questionable constitutionality and repeatedly voiced contempt for the press, the First Amendment and the freedoms it promises in a series of speeches and tweets which are ironically protected by the very cornerstone of American democracy he wishes to abolish.

And unfortunately, President Trump is not the only member of his administration to share such views.

Assistant to the President and Chief Strategist Steve Bannon has referred to the press as “the opposition” and explicitly told journalists to “shut up.”

A free press is essential for a free country. The founding fathers valued it so highly that it was among the first to be protected alongside speech, assembly, religion and petition in the Constitution.

Just as freedom of speech guarantees the right for all Americans to express themselves without fear of censorship, freedom of the press guarantees a platform where information, whether critical or not, can be shared freely among the American people.

Without either, we are effectively blind and mute in the eyes of the government.

No one expects the press and the government to agree on everything.

Bias and misleading or otherwise incorrect information in journalism should be rightly condemned.

But the Trump administration’s eagerness to brand anything disagreeable as “fake news” is not just a recipe for disaster — it’s a mockery of American principles, and we as student journalists feel compelled to speak out.

President Trump referring to journalists as “the most dishonest people on Earth” while counterintuitively threatening to “open up” libel laws for his own benefit goes against everything the Constitution represents.

And once the press is censored, the people aren’t far behind.

Perhaps Counselor to the President Kellyanne Conway can answer to these transgressions with a few of her “alternative facts,” but for the rest of us, the truth of a free and independent press will do nicely.