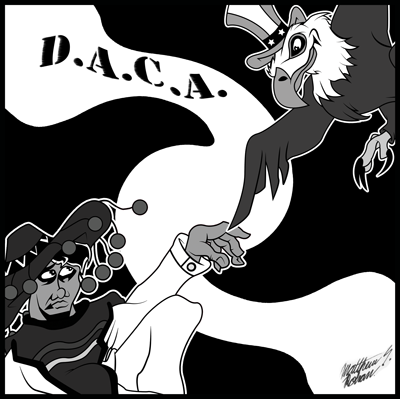 In 2014, we praised President Barack Obama’s series of executive actions amending his 2012 Deferred Action for Childhood Arrivals policy, which allows undocumented immigrants who were brought into the country by their guardians to avoid deportation and find legal employment under strict criteria.

The policy laid the groundwork for overdue immigration reform. Existing policies discouraged desperate people from taking the proper steps to becoming American citizens for fear of being deported and forced countless children from the only homes they’d ever known.

But the flaws in this temporary fix to a permanent problem are only becoming more apparent with time, and the upcoming presidential election carries the risk of a new executive order that can do away with DACA entirely. While amnesty for all undocumented immigrants is not the solution, painting them all with the same jail-striped brush carries ethical problems, too.

The reality is that DACA is a blueprint riddled with holes. While those who qualify for the program have more freedom to improve their lives, they are still bound by regulations.

DACA qualifiers are required to renew their status every two years for a fee. They are also required to file taxes each year and are unable to apply for passports, certain scholarships or federal aid programs such as federal student aid even when many are more than qualified.

While we can at least understand the reasoning behind these rules and the legal gray areas they encompass, the lack of a clear path to a green card is inexcusable. The process is already tedious enough, and we don’t think it unreasonable to propose a plan where it can be streamlined just a little by allowing applicants to transfer their time in DACA into earning a card or residency.

The current state of DACA has kept applicants in a delicate limbo, and all it takes is a new president’s signature to bring them all down. If we hope to see comprehensive immigration reform in the near future, Congress needs to set the executive actions in stone.

Whether it be in the home or in the lecture hall, there is no way to plan for a future when so many forward paths are blocked. DACA qualifiers already have to undergo a barrage of questions and paperwork to prove they want to become contributing citizens, so is it so much to ask that we actually give them a fair chance?