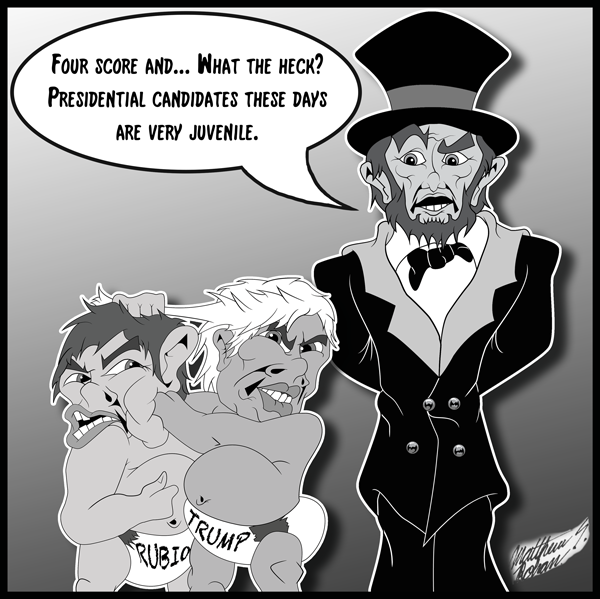 Donald Trump has stood center ring of the American media circus for decades, and his farcical bid for the 2016 presidential nomination has only left us searching for the hidden cameras.

When he isn’t making vague threats disguised as vaguer promises to close the country to Muslims or force Mexico to build a wall at its northern border, he’s targeting rival candidates from all parts of the political spectrum with insults and name calling unworthy of an elementary school playground.

And unfortunately, his Super Tuesday win for seven states has only solidified his status as a Republican front-runner.

Even dedicated members of the GOP seem to be scratching their heads at this development. Trump’s campaign has fractured the already unstable Republican party, drawing accusations questioning Trump’s claimed status as a conservative Republican, and many members rightly find his more extreme behavior unacceptable for someone representing them.

Even more distressing than Trump’s unthinkable success is the fact that some nominees are more than willing to stoop to his level.

Tension between the nominees reached an embarrassing low at the March 3 Republican debate, where grown men in expensive suits were too busy trading childish insults about the size of each others penises to actually debate their stances.

In response to Trump calling him “little Rubio,” the presidential hopeful said Trump had small hands for a man his height at a university rally in Salem, Massachusetts. “And you know what they say about guys with small hands,” Rubio added before joking that Trump would “make America orange.” At a Dallas rally, he mocked Trump’s twitter postings by reading them aloud, .

Trump’s outrageous behavior is already being rewarded by a shameful number of voters, and the last thing our country needs is for so-called professionals to mimic him in a pathetic rush for votes.

As alarming as it is that such a cartoonish character has made it this far in the nominations, it’s even more alarming that others feel the need to resort to mudslinging instead of worthy criticism.

By HARRIET RAMOS @HarrietRamosETC Federal agencies are ramping up their response to the COVID-19 crisis by expediting approval for new testing procedures and relaxing regulations to give health care providers more flexibility in treating patients. […]

Editorial: Long overdue program will keep some out of jail

A long-needed proposal for a six-month pilot program intended to reduce penalties for misdemeanors, including low-level marijuana possession, is finally making progress with the Dallas City Council almost 10 years after its introduction. The experimental […]

We recommend that the American people elect Hillary Clinton as the 45th president of the United States. This election cycle has been especially bizarre, and while some of the more outlandish behavior from Donald Trump […]