Reporter unearths the murders of women in Mexico 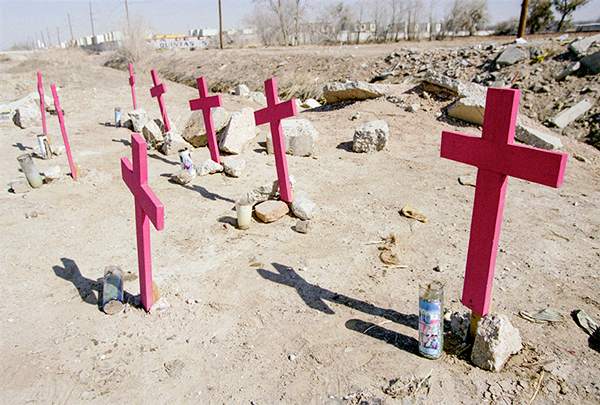 Pink crosses in Juarez have become representative of thevictims of femicide. By erecting these ‘memorials’ families honor the deaths of their daughters while raising awareness of the issue. PHOTO COURTESY OF DIANA WASHINGTON VALDEZ

In journalism, higher numbers of bodies often mean higher media coverage. The suffering of families, murder victims and lack of action from the local authorities are swiftly reported and later forgotten by all those whose lives are not affected by the events.

But for the inhabitants of Ciudad Juarez, on the border of Mexico and the United States, the numbers of bodies have been piling up since 1993, a rise in violence that has distinguished the city around the world.

Diana Washington Valdez, a reporter from the neighboring Texas city of El Paso, has turned her attention toward the events, which she shared on a virtual presentation with students on Nov. 5.

Intrigued by early reports that did not investigate further than the body count, she has dedicated much of her work toward the reporting of femicides – the murders of women – in Juarez.

The victims, who generally come from low-income families, are seen as “disposable victims,” Washington Valdez said.

“If this had been happening to the daughters of wealthy families, it would not have continued for 20 years, as it has happened,” she said.

She began covering the events for the El Paso Times in 1999. Encouraged by one of her editors, she continued her investigations and published the book “The Killing Fields: Harvest of Women” in Spanish in 2005 and in English the following year. In it she discusses prominent cases in which women disappear in downtown Juarez, only to be found dead, showing signs of rape and with mutilated bodies.

A decade later, the disappearances and murders of women continues. The cycle increases and decreases continuously, over 1,700 women have been murdered since 1993. After a series of investigations in which the Federal Bureau of Investigation and the El Paso Police Department collaborated with the local law enforcement agency, several theories surfaced about who might be the culprit behind the murders.

“It’s really on our doorstep,” DeAngelis said about the Juarez femicides. “And there hasn’t been a lot of attention given to it.”

After working on the case, the FBI, El Paso police and the Juarez police identified drug traffickers, serial killers, copycats, cartel gangs killing women as initiation rites and cabals of rich men hunting women “for sport” as the main suspects behind the murders.

Some investigations in Juarez have yielded results not shared with the public. Even though people were expected to be arrested, when the results were “turned over to the higher ups” nothing happened, according to Washington Valdez.

“Everybody seems to get away with anything in that environment,” she said.

Corruption, which according to Washington Valdez plays an important part in the murders and the lack of justice, filters down from top officials into regular citizens.

“The leadership sets the tone,” she said. “When you have people in the high level working with the cartel to protect drug trafficking, you already set in motion an entrenched system of corruption that affects all police levels.”

She said that honest police who want to make a difference are unable to.

“Anybody who tries to get out of line to do the right thing is either expelled, killed or otherwise punished,” she said.

Violence in Mexico extends to aggression toward reporters from around the country. Thirty-two journalists have been murdered between 1992 and 2015, according to the Committee to Protect Journalists. However, Washington Valdez said that there have been more than 70 murders.

She said that the violence in Mexico has been covered through “parachute journalism,” the practice in which a foreign reporter goes into the place, covers the event and leaves because of the danger of the situation.

Although Washington Valdez said she tries “not to focus on that aspect of things,” her own life has been in danger, according to DeAngelis.

“She had to take a break from her investigation because of the emotional toll that it had on her.”

DeAngelis described Washington Valdez’s character as exemplary for a reporter.

Currently, Washington Valdez is researching the unsolved West Mesa case about the murders of 11 young women in Albuquerque and is doing additional research on the case of David Leonard Wood, a serial killer in El Paso who has recently appealed his case on the basis of being mentally disabled.

Through her reports, Washington Valdez seeks to “find out who is killing these women and why,” she said.

Washington Valdez’s journalistic experience extends from the page into film. She has been involved in various film documentaries about the disappearances and murders of women in Juarez. Her work has won numerous awards, which keep the issue relevant, she said.

“What happened in Juarez can happen anywhere,” Washington Valdez said.

Recently, the Eastfield criminal justice department hosted a virtual conversation with Washington Valdez meant to bring the “international aspect” of serial murder studies to the students. DeAngelis chose the El Paso cases due to their proximity to Dallas, and the impact it could have among the college community.

“I kind of knew about it but I didn’t know in depth how it worked or how the government was behind it,” Valdez said.

“They don’t really talk about this stuff in the news,” Alexander Gutierrez, a criminal justice major, said. “All those poor families … it is somebody’s daughter getting murdered.”

The library currently has two copies of “The Killing Fields” available for check out.