This is not the first time a bill promoting guns on campus has passed through a Texas house subcommittee. As recently as April 2013, the House Committee on Homeland Security and Public Service approved a similar bill by a 7-1 vote, but it was ultimately shot down.

While the bills would allow private universities to opt out, public colleges such as Eastfield would have no say.

We understand Sen. Birdwell’s concerns, but guns on campus can only create more trouble.

In an emergency situation, it is best to have trained professionals such as the police respond. We have no doubt that many, if not most, gun owners are responsible with their weapons, but in the heat of a school shooting, most would not have the psychological training to handle the situation safely and effectively. 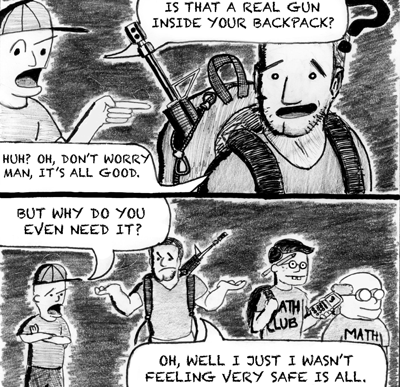 This can also create scenarios where innocent people can be mistakenly shot. If a shooter opens fire and another gun owner attempts to stop them, they can easily be mistaken for the aggressor. Consider the 2011 assassination attempt on Arizona politician Gabrielle Giffords. She was among the 13 injured when a man opened fire on a crowd outside a supermarket, killing six. When a survivor pulled a gun on the shooter, he narrowly avoided getting shot by another gun owner in the chaos. The shooter was subdued by a retired Army colonel who chose not to draw his own weapon.

Additionally, from a practical standpoint, allowing guns on campus would cost more money. Both city and campus police would need to pull in more funding for increased police presence and psychological training.

Since state law does not allow citizens under 21 to carry handguns, most four-year schools would not have very many carriers on campus. In two-year schools where the age of the average student is higher, however, we could potentially have hundreds, if not thousands of unnecessary guns among us.

Whether or not we should have the right to own guns is a debate for another day, but we do not need them in a stressful college environment.


I’m guessing that most of the award winning by ‘The Et Cetera’ occurred closer to 1971 than to present day.

This editorial states, “When a survivor pulled a gun on the shooter, he narrowly avoided getting shot by another gun owner in the chaos. The shooter was subdued by a retired Army colonel who chose not to draw his own weapon.” That is not what happened.

At no point during or after the January 8, 2011, shooting of Gabrielle Giffords did any of the survivors pull a gun on the shooter. Furthermore, Bill Badger, the retired U.S. Army colonel who tackled the assailant, was not carrying a gun.

The only bystander who had a gun was Joe Zamudio, who was shopping nearby and rushed to the scene when he heard the gunfire. Zamudio said he stuck his hand into his pocket and flipped off the safety on his gun but never drew it. When he saw someone holding a gun, he grabbed the person and pushed him against a wall. That person turned out to be Col. Badger, who was holding the gun he’d just taken from the assailant.

Zamudio’s misidentification of Badger as the assailant is an important cautionary tale that illustrates the importance of Texas’s concealed handgun training (http://youtu.be/KwS-sDyudZo), which cautions applicants for a concealed handgun license against attempting to intervene in a crime that does not already involve them (Arizona, where this shooting occurred, does not require training or licensing for citizens who carry guns, and Joe Zamudio had no training or license), but the scenario wasn’t nearly as dramatic as the fictional account depicted in this editorial.

Anyone who wants to seriously consider whether Texas should legalize the licensed concealed carry of handguns on college campuses should take a look at these links: