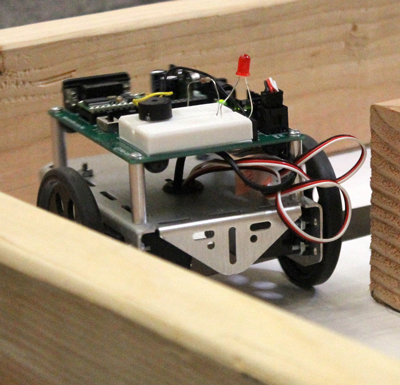 Professor Elida De Obaldia’s introduction to engineering course is stirring up competition with a race to build the best robot.

The ENGR-1201 class was added to the course schedule this semester after an extended hiatus and already has students thrilled about engineering.

“It’s a great class and it’s exciting to work with all of these different pieces of technology and learn how everything works,” said computer science major Djan Soeralaya, a class member and competitor.

The students worked with store-bought Boe-Bot robot kits to design a robot that can maneuver its way through an obstacle course designed by Obaldia.

The students are paired up into five groups, each approaching the design of the robot and obstacle course in their own way.

“Some students are using the infrared camera and laying down black tape along the course, which the robot will then follow.

The one that most of the students are using is the computer program. They have to count different factors, then tell the robot through the program to go here and turn there.”

Soeralaya said programming the robots can be difficult at times, but believes it is all part of the process.

“The guidebook has been a big help,” she said. “It gives us instructions on how to calculate each turn and formulas for each measurement, but at the end of the day it’s up to us to figure out the exact numbers. It’s all about trial and error and doing it over and over again.”

Soeralaya and her classmates competed in the Pit onNov. 14.

“Each team is going to have three trials and each one will be scored depending on how far they make it through the course,” Obaldia said before the contest. “At the end we will figure out who made it the farthest and decide on a winner.”

“With this project being a competition, we have the desire to make it better than everyone else’s,” Soeralaya said. “We want to be the group that wins.”

Mechanical engineering major William Soto, another competitor, said this project is a great introduction for students fresh to the world of engineering.

“I’m still trying to understand what programming is and how it works, and also how to gauge the movements of the robots and manipulate them,” Soto said. “But I think this is a very good example of application because you’re constructing a device that you can immediately see go to work. You’re learning how to program it and see what each command does when you tweak it a little bit.”

Obaldia thinks the competition is a healthy way of motivating her students to excel in their field of study.

“I want them to walk away from this class excited about engineering,”she said. “Engineering classes are very strict and require lots of mathematics and critical thinking, and so does this class, but I want them to get the feel for actually doing a project. Then they can go on and learn the hard stuff. This is what engineering is all about: designing projects and solving a problem.”