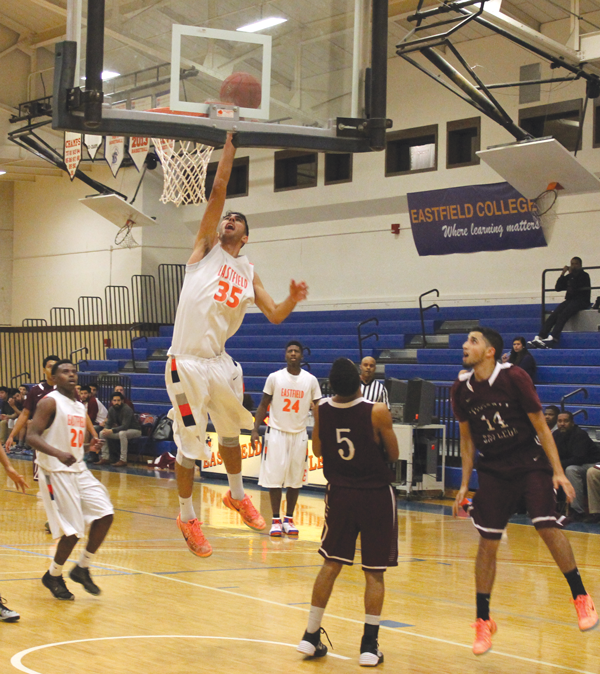 The fourth-ranked Eastfield Harvesters basketball team is off to a 7-0 start after a 112-91 home victory over El Centro on Nov. 14. The explosive Harvesters have already surpassed the 100-point mark in scoring four times in seven games and are now averaging 106 points per game.

The most recent game was close for a while, with Eastfield holding a slim 54-49 lead at the half. However, coach Anthony Fletcher’s “spring and execute” offense wore down El Centro in the second half, outscoring the Chaparrals 58-42. The Harvesters went on a 12-1 run with about three minutes remaining to close out the win.

Freshman guard Danzel Whitemon, who has been a big key for the Eastfield offense in the early season, shot 13-for-18 from the field and finished with 29 points, nine rebounds, three steals and two blocks.

“We have to win on the glass, get out in transitions and do all of the little things,” Whitemon said. “We run a lot in practice and should be able to outrun anybody.”

“I am [playing] my role, basically rebounding and getting them the ball to score,” Kaoud said.

Sophomore guard Walter Bell was also in double figures, tallying 15 points and six rebounds. When asked about the team’s slow start, Bell said the Harvesters didn’t take a good approach to the game in the first half.

“We took them lightly,” Bell said. “We did not expect them to be that close at half-time. We have to play better defense, slide our feet and work on our free throws. Free throws are hurting us right now.”

Freshman guard Majycal “Magic” Howard ended the night with 25 points and seven assists, hitting three of his five 3-point attempts and going 8-for-8 from the free-throw-line.

Although the 21-point victory was the Harvesters’ closest game this season, Fletcher said there is still room for improvement before district play begins in January.

“We have to be mentally there, from start to finish, and come out and play ‘our’ game,” he said.

Eastfield beat Southeastern Oklahoma University 101-92 on Nov. 17.  The Harvesters will travel to Tomball Junior College on Nov. 20 for the first of three road games in three days. The next home game is 7 p.m. Nov. 25 against Paris Junior College.

Eastfield 84, CYM Prep 62
Three starters scored in double figures as Eastfield rolled to a 22-point home win over CYM Prep on Nov. 5. Whitemon led the Harvesters with 19 points on 7-of-9 shooting, while Devincent Brooks had 15 points and Bell added 10. Donald McBride and Earnest Matthews both scored nine points off the bench.

Eastfield 120, Victoria College 90
In his second start of the season, guard Matthews scored 21 points — all on 3-pointers — as the Harvesters dominated Victoria College again Nov. 8 at Eastfield. Matthews was 6-for-11 from the 3-point line in the game.

Yerry came off of the bench to lead Eastfield in scoring with 20 points. Brooks added 17 points, while Bell was 6-for-8 from the field, including 3-for-3 from 3-point territory, to finish with 16 points. Kaoud and Bell both had nine rebounds.

Eastfield 98, Mid-American Christian JV 66
After leading by only nine points at the half, the Harvesters outscored Mid-American Christian’s junior varsity 58-35 in the second half to keep their perfect record intact. Kaoud had 16 rebounds, equaling the total of the other four starters combined.

— Brad Watkins contributed to this report