Harvesters shine on the diamond 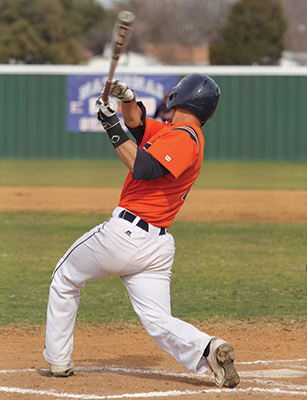 Sophomore catcher Taylor Empkey will lead the Harvesters against
conference opponent Richland at home this weekend.

By Kevin Cushingberry, Editor in Chief

The Eastfield Harvesters baseball team is off to a hot start. They’ve won their first 11 games, including nine against Division I opponents.
In those games, they’ve scored 87 runs, and compiled a team batting average of .331, leading the nation in both categories.
Sophomores Taylor Empkey and Gavin Gregory have led the team to this point. Empkey is hitting .529 while Gregory is batting .400. Coach Michael Martin said streaks like these are what teams need.
“Sometimes hitters just get into a zone like that,” Martin said. “You try and ride it out as long as you can because it’s not always going to be that way.”
Assistant coach Travis Graves, who played for Martin at Eastfield in 2008 and was an all-American, Easton Defensive Player of the Year, Rawlings Gold Glove Award Winner, all-regional selection and two-time all-conference selection, said the team’s early success hasn’t all been about bats.
Graves said Gregory’s ability to steal bases also impacts pitchers.
“The pitcher’s timing is affected,” Graves said. “When you put someone like Gavin on first who causes havoc, instead of being focused on just getting the hitter out, now the pitcher has to think about him ‘cause he can try and steal at any time.”
Martin said the team has done a good job of executing the game plan.
“We’ve played pretty consistently, and that’s what we’re looking for,” he said. “The players have competed well. We’ve got a long way to go. They’ve lived up to our expectations to this point, but we expect to continue to get better. Hopefully, these kids will keep going at it. I know they will because they have those kinds of attitudes, good work ethic and, most importantly, the desire to get better.”