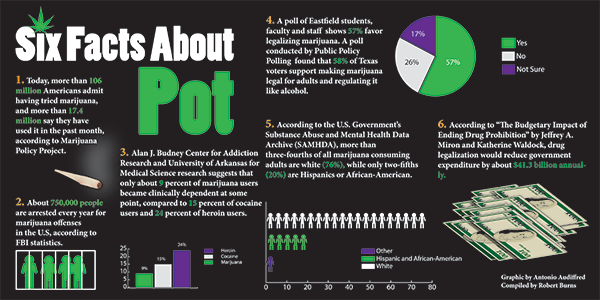 Currently, it is provided medicinally in 21 states for people suffering from a number of illnesses and debilitating diseases.

Marijuana has been causing quite a stir in the media after its recreational use was legalized in Colorado on Jan. 1. According to the Huffington Post, Colorado sold more than $5 million worth of marijuana during its first week, and business owners reported having lines out the door. The Dallas Morning News reported that many of the prospective buyers were Texas residents.

So, Is Texas ready for the pandemonium? Many Eastfield students believe the state  should legalize marijuana for recreational and medical use.

However, some students can’t believe that any state would even consider allowing marijuana to be used legally.

Audio engineering major Mirna Roque said Colorado’s decision is “revolutionary” and this is something every state should consider.

“Look at the statistics from other countries, she said. “A lot of them said because they [effectively] legalized it and decriminalized it, it’s gotten to the point where people don’t really do it as much. So you kind of have to put that into perspective.”

Several countries have decriminalized the possession of marijuana, including The Netherlands, where it is legal to possess less than 5 grams of marijuana.

Under this policy, fewer adolescents use marijuana there than teens in the United States, according to the Drug Policy Alliance, which advocates for science-based drug policies.

Business major Rameez Sohail believes one benefit  to legalizing marijuana is additional revenue, but he said legalizing it will ultimately harm our youth.

“It will have the [same] effect as alcohol and tobacco,” he said. “If we legalize marijuana, it will push our society further into drugs.”
English major Lauren Brandon agreed.

“I believe it opens the doors to many issues,” she said.  “Everyone says prohibition brought about its own set of crimes, but with that being said, so does having it [legalized].  So I think that you have to choose the lesser of two evils in certain situations, and I think that by legalizing it you’re just opening the doors to young kids getting ahold of things that they shouldn’t.”

“Legalizing [marijuana] for Texas’ purposes would have a net benefit of increasing tax revenue but also having the FDA at least having a hand in what’s actually in marijuana,” speech instructor Nick Vera said.  “[Knowing]that we aren’t getting things laced with all kinds of things would help control the quality of what people are smoking and what people are putting in their bodies.”

One of the biggest debates is whether marijuana is a “gateway drug.” The Drug Policy Alliance claims that most marijuana users never use any other illicit drug. Its website also notes that “marijuana is more of a terminus rather than a gateway drug.” Despite this argument, some believe that legalizing it could lead to harder drugs.

“You get that little bit of a feeling and you want more,” Brandon said. “People taste one thing and they want more. It’s just how we are.”

However, Vera said that a number of things could entice people to try new things.

“I can read a book that glorifies drug use from the 1920s and it might make me to go off and do something like that, but does that mean making movies about drugs is illegal?” he asked. “There are tons of things that inspire people to pursue new avenues of escapism.  I feel like simply smoking marijuana certainly leads some people to wonder what other kind of highs are there out there.  But I think that too, it doesn’t necessarily have to.”

FBI data shows that  750,000 people were arrested in 2011 for marijuana, and the majority of the charges were for simple possession. Students believe one of the major advantages to legalizing its use is cutting down on enforcement cost.

“[Legalizing] it is going to reduce crime because most of the people that are incarcerated right now are because of these charges,” sociology major Teresa Santos said. “We are wasting a lot of money on taxes on keeping somebody in jail for possession of marijuana.”

Associates in Science major Jonathan Montenegro’s agrees with the move to decriminalize marijuana.

“I honestly couldn’t tell you a disadvantage,” he said. “There are obviously medical advantages, there are the economic advantages, and reducing crime rate is always good. So I don’t see anything wrong with it.”