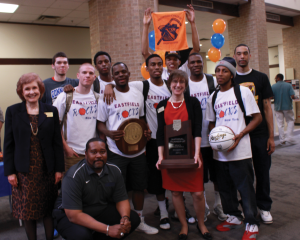 Eastfield’s best wasn’t enough as the Harvesters fell to the Jersey Blues by six points, 61-55.

Following the second-place finish on March 16, coach Anthony Fletcher said he would remember this season forever. He said the players would too, after the sting of defeat fades.

“This is the best team I’ve ever coached at Eastfield,” he said. “Some guys coach 60 years and never get a chance to play for a national championship. They gave me that this year.”

Fletcher called the game a heavyweight fight and said he was proud of the fortitude his team showed. After leading by two at halftime, the Harvesters fell behind by double digits following a second-half run from Brookdale, which was led by guard David Rosado’s 15 points.

The Harvesters fought back to cut the deficit to six points within the final minute, but that was as close as they got. After failing to convert on several three-point opportunities, the game was over.

“We lost by six points,” Fletcher said. “Two baskets. We made it to the national championship. Only two teams in the country can say that. Nobody can take that away from us. Years from now, [the players] will be talking to their kids about the time they competed for a national championship.”

Freshman forward Andrew Maxie said the championship game was the culmination of a magical season where everything came together at the right time for the Harvesters.

“It’s crazy how things work out,” he said. “Semar [Farris] came back, Mike [Love] transferred from Kansas Wesleyan, me and [David] Bonner came from Odessa and Tweet [Oscar Lewis] transferred from Panola on the first day of school. Who would have thought this time last year we would all be competing on the same team for the national championship?”

The Eastfield players were awarded medals acknowledging their second-place finish. Forward Mike Love was also named a member of the all-tournament team after averaging 18 points in the team’s three Elite Eight games.

Love had a huge impact on the Harvesters’ first-round victory over Caldwell Community and Technical College of North Carolina. He scored 31 points and nailed the game-winning three-pointer with .9 seconds left in overtime to give the Harvesters a 101-99 victory.

“It felt good to close it out,” Love said. “I thought Brock [Hunter] was going to take the shot, but he swung the ball to me, and I knew I had to make it.”

Hunter did take the shot in the Harvesters’ semifinal game against MassBay. In fact, he demanded it. He scored 27 points and added 12 rebounds to lead the Harvesters to a 26-point victory, 91-65.

“We usually start out slow,” Hunter said. “I just had to demand the ball. We had to win, so I just demanded the ball early.”

In the championship game, Eastfield shot just 36.7 percent from the field and went 2-for-15 on three-point attempts. Hunter said officiating affected the team’s play.

“We weren’t focused on the game,” he said. “We were more focused on the refs. Before the game they told the captains they were going to let us play. Then, on our first possession on defense, I got called for a petty foul.”

Eastfield didn’t shoot a single free throw in the first half. The Harvesters finished the game 9-of-13 from the free-throw line. Brookdale was 16-of-30.

Despite the loss, Hunter said he still views the season as a success.

“It’s destiny that we made it to the championship,” he said. “Mike hit that three for us to win on Day 1. If he misses that, we’re playing in the losers bracket. But he made it, and we were right there in the championship.”